‘Nutcracker’ with a twist 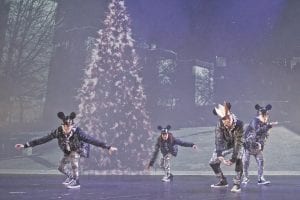 The show, a contemporary dance spectacle set to Tchaikovsky’s timeless music, is a holiday mash-up for the entire family.

Produced by the New Jersey Performing Arts Center (NJPAC) and co-commissioned by United Palace of Cultural Arts, “The Hip Hop Nutcracker” kicked off its second North American tour November 17. The touring troupe will perform in 23 cities from New York to Los Angeles.

Directed and choreographed by Jennifer Weber, “The Hip Hop Nutcracker” is a full-length production performed by a supercharged cast of a dozen all-star dancers, a DJ and a violinist.

Through the spells cast by the mysterious Drosselmeyer, Maria-Clara and her prince travel back in time to the moment when her parents first meet in a nightclub. Digital scenery transforms E.T.A. Hoffmann’s beloved story set to the streets of New York. The dance work celebrates love, community and the magic of New Year’s Eve. 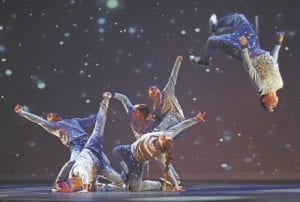 Special guest MC Kurtis Blow, one of hip hop’s founding fathers, will open the show in several cities with a short set before rapping the introduction to “The Hip Hop Nutcracker.”

“Three years ago, the world premiere of ‘The Hip Hop Nutcracker’ was a unique holiday event that united hiphop fans, families, and classical music and dance audiences – so many different people in our community – under one roof,” said David Rodriguez, NJPAC’s executive vice president and executive producer. “We are excited to share this new classic with audiences across the country.”

The series is sponsored by Health Alliance Plan with contributions by the Stella & Frederick Loeb Charitable Trust administered by FirstMerit now a part of Huntington.

For tickets and information, visit: www.TheWhiting.com. Tickets cost $32 5o $38. Student Rush tickets are also available the day of the performance for $12.

To purchase tickets, visit TheWhiting.com, call (810) 237-7333 or visit the Ticket Center located at 1241 E. Kearsley St. just off I-475 between the University of Michigan – Flint and Mott Community College. Tickets are also available for purchase at The Whiting’s Downtown Ticket Center at the Flint Farmers’ Market. Smart phone and tablet users can download The Whiting App to make purchases.

The Whiting is a member organization of the Flint Cultural Center Corporation and is dedicated to bringing the performing arts to the community. The Whiting is a nonprofit organization and an Equal Opportunity Employer providing programs and services without regard to race, color, religion, national origin, sex or handicap.