A look at some of the damage done by a tornado that touched down July 24 in Clayton Township. Photos by Lania Rocha

CLAYTON TWP. — The National Weather Service has confirmed that a tornado touched down in Clayton Township on Saturday, July 24.

Wind speeds were clocked around 100 miles per hour as the EF-1 twister cut nearly a two-mile swath through the northern sector of the township, according to NWS Meteorologist Megan Varcie.

The tornado was estimated at 200 yards wide, and it was on the ground for about five minutes, she said.

Swartz Creek Area Fire Department Chief Dave Plumb said the area around Calkins and Morrish roads was hit hardest as the storm tore through the community around 6:30 p.m.

“It was right in the Corunna/ Calkins/McKinley area,” Plumb said, adding that Elms and Corunna roads also sustained some effects of the storm.

“There were some gigantic trees that were completely twisted and busted at the base. It did some damage to a couple of barns, outbuildings and garages,” Plumb said.

“In terms of damage, there was a lot of garage damage, garages that were partially or completely destroyed, as well as minor structural damage to homes, including damage to roofs and siding, in addition to some tree and crop damage along that path as well,” Varcie said. 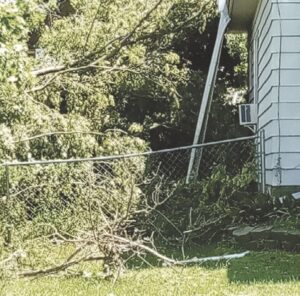 The storm also brought power outages throughout the area and flooding in the City of Swartz Creek.

No injuries were reported.

Reports of a tornado in the Linden and Hill roads area of Mundy Township were unconfirmed, Varcie said.

“We have three confirmed tornadoes at this time: Clayton Township, White Lake and Armeda,” she said. “There are no further confirmations of tornadoes, and no further storm damage.”

Clayton Township was last hit by a tornado in March of 2019 when a line of storms produced multiple areas of circulation resulting in four tornadoes that touched down in Shiawassee and Genesee counties. Three were rated as EF-0, but the fourth, which hit near Vernon, was rated EF-2 and carried debris up to seven miles away, according to NWS archives.