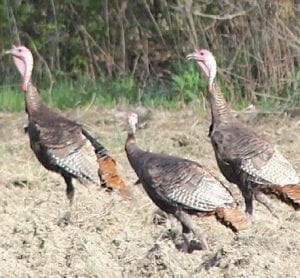 Wild Turkeys seek out food in a planted field.

EDGEFIELD, S.C. — The National Wild Turkey Federation celebrated its 39th anniversary in March. Founded March 28, 1973, in Fredericksburg, Virg., the NWTF has a long history as North America’s most successful upland wildlife conservation organization. That’s thanks to many dedicated volunteers and fantastic partnerships with state and federal agencies, and corporate partners. Those partnerships have helped make the return of the wild turkey the greatest conservation success story in North America, says the NWTF.

“We are very proud of our achievements during the last 39 years—all made possible by our dedicated base of volunteers, staff, corporate partners and state and federal agencies,” said NWTF CEO George C. Thornton. “Without everyone believing in our mission of conservation and the preservation of our hunting heritage, our organization could not have attained such a high level of success.”

The NWTF notes that its Michigan chapters have raised more than $3,153,058, spent $1,664,540 on habitat improvement projects, spent $502,104 on educational programs and handouts, spent $43,070 on wild turkey management efforts, spent $36,900 on hunter safety programs and initiatives, spent $2,875 to trap and transfer turkeys within the state

• The NWTF has conserved and improved 17 million areas of essential wildlife habitat with its partners by raising and investing $372 million since 1985. Habitat projects that help wild turkeys also improve habitat for deer, quail, rabbits, songbirds and many other species in our fields and forests.

• Wild turkeys have been successfully reintroduced to 99.5 percent of suitable habitat in North America. The NWTF has worked with state wildlife agencies to trap and transfer more than 200,000 wild turkeys across North America.

• In the early 1900s, there were fewer than 30,000 wild turkeys left in the United States due to unregulated hunting, and detrimental agricultural and forestry practices. Today, there are more than 7 million wild turkeys in North America.

• The NWTF’s outreach programs— JAKES, Women in the Outdoors and Wheelin’ Sportsmen—introduce about 100,000 youth, women and people with disabilities to the outdoors annually. Passing on the outdoor tradition is essential to the future of conservation and hunting.

• More than 782,000 first-time hunters have been able to take to the field through mentored hunting licenses made possible by Families Afield-style legislation. The NWTF, National Shooting Sports Foundation and U.S. Sportsmen’s Alliance created the Families Afield program, which was later joined by the Congressional Sportsmen’s Foundation and the National Rifle Association.

• More than 459,000 acres of public hunting land has been acquired through the More Places to Hunt program. Access is the No. 1 reason people quit hunting, and the NWTF is working to provide more opportunities across the nation.

“We believe the best is yet to come because not only are we helping wild turkeys, we’re also improving essential upland habitat that benefits a great many species,” Thornton said. “We’re fighting to defend and preserve our hunting heritage. We are fighting a good fight. We’re fighting the right fight for our families, children and grandchildren.”