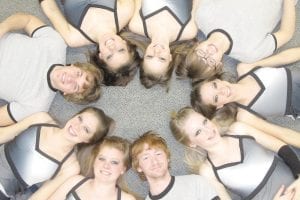 SWARTZ CREEK — Odyssey Winterguard Unit Director Kacey Vanderkarr and her team were celebrated at last week’s school board meeting for their accomplishments this year.

“Twice this season Odyssey was promoted to a higher class, and where we stand now, we are only one class away from being able to compete at the world championships. To use a sports analogy, we started out in little league, but ended up semi-pro,” said Vanderkarr.

They garnered praise, and a first place position for a performance “designed to raise awareness for those that suffer from depression and self mutilation,” according to Vanderkarr.

“I can’t even begin to tell you how many times we were congratulated for taking on an issue that you don’t often see talked about,” she said.

Vanderkarr speaks highly of her team, whom she calls “over-achievers” in all aspects of their lives. In fact current member Becca DeJonge who will be graduating this year, is coming back next year to help coach Odyssey.

“The members of Odyssey were amazing this season. Everyone got along and worked really, really hard, which paid off in the end. They made this season truly about the journey and not the destination. We challenged them, and they rose to the occasion,” she said.

The accomplished guard students are currently trying to raise funds to go to guard camp during the summer. “We have come a long way this season and to continue that growth we need to learn something new,” said Vanderkarr.

The team has only four weeks left to raise enough money to attend.

Those seeking to help Vanderkarr and her team through donations can call 810-869-1784.