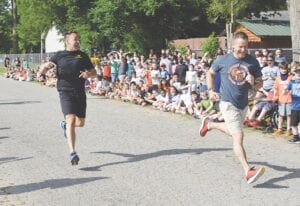 FLUSHING — Central Elementary students were treated to an entertaining footrace between Central Elementary Principal Rob Steinhaus and Genesee County Sheriff Chris Swanson at the school’s Field Day main event on Monday. Despite a game effort from Swanson, Steinhaus pulled away at the end to win the race, which was a 50-yard dash on the drive to Raider Field next to the baseball diamond.

The Genesee County Sheriff’s Office also provided a radar speed trailer for Field Day so that students could see how fast they were running in race events. Colin Coulter, a physical education teacher at Central Elementary School, reached out to the Sheriff’s Office on social media to see if the school could borrow a radar speed trailer from the department for the day.

“I saw on Facebook that another school district had a radar speed trailer for Field Day, so I thought that would be a cool thing to have here at our Field Day,” Coulter said. “I tweeted at the Sheriff’s Department…and it just kind of took off from there.” 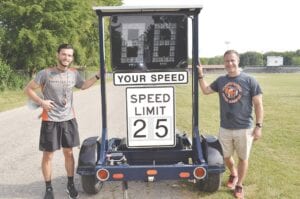 As part of the deal to secure the trailer, Principal Steinhaus agreed to challenge Swanson to the race.

In addition to testing out the radar speed trailer, students enjoyed team games, relays and an obstacle course. — B.G.