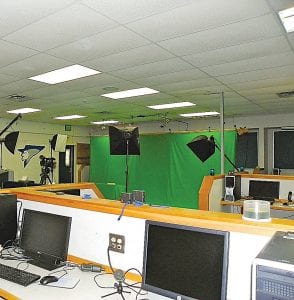 Quality cameras, computers and many other pieces of equipment in the CAMS broadcast studio were purchased with PEG money.

In this case, CNN stands for the CAMS News Network which is a growing broadcast training program at the middle school that is being greatly enhanced by public, educational, and governmental (PEG) access funding. The money is allocated by Flint Township under an agreement with Comcast Cable Co. that a portion of franchise fees be returned to the community for public access TV programs.

Last month, the Township Board of Trustees approved payment of $10,000 in PEG funds to Carman-Ainsworth – the only one of three school districts in the township to comply so far with Comcast requirements for receiving the money.

Township clerk Kim Courts reported to the board the availability of $20,150.24 in the PEG fund, according to the township controller. The funds accrue quarterly.

“ I have attempted several times to contact the Swartz Creek School District and the Flushing School District to have them come into compliance but I have not received a response from either of them,” Courts said. That could be due to recent changes in administration, she said, adding that she will be sending out another letter reminding those districts that funds are available and what they have to do to receive them. She estimated that there’s about $6,000 left.

Carman Ainsworth gets the biggest chuck of PEG funding because it has most of the eligible households in the township. Some PEG money is set aside to pay for videotaping of township board meetings, Courts said.

To receive PEG funds, eligible school districts have to provide a written detailed list of how the money is being used, which is reviewed and approved at the discretion of the township board.

In its first quarterly compliance report for 2011-12, CAMS described in detail its CNN club which meets three times a week at 7 a.m. and creates a newscast broadcast schoolwide every Friday and also shown on Comcast channel 17.

PEG funds were used to wire the CNN studio to the press box on the football field making it possible for students to videotape and broadcast Varsity football games. PEG money also was used to upgrade wiring buildingwide making it possible to hook up the coming hallway TV monitors. Wiring in the gym also enables students to videotape events there without leaving the broadcasting studio.

PEG funds have paid for upgraded equipment including computers, video cameras, digital cameras and a TriCaster which enables remote broadcasts.

“If we didn’t have it we couldn’t be doing what we’re doing,’’ said Mike Warren, CAMS technology instructor who oversees the CNN club. “This money is allowing us to do so much more.’’

Some of the PEG money goes to the high school, Warren said. But the middle school has made good use of its share of funds in the past three years.

Once equipment needs are met, Warren envisions improvements to the broadcasting studio which is basically a large classroom draped with green sheets.

Few would guess from watching the CNN newscast that the fancy desk and set backdrop for the student reporters are superimposed over a modest make-shift green room.