Off to a ‘bright’ future 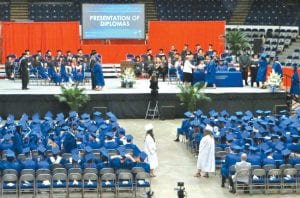 Members of the Class of 2013 march across the stage to receive their diplomas.

FLINT TWP. — With all the pomp and circumstance due in a milestone occasion, Carman-Ainsworth’s Class of 2013 marched across the stage June 5 to receive their diplomas.

The 25-member class listened to a class history presented in poetic form that recounted the highlights of their high school years.

They watched a video showcasing other memorable class moments.

Whitney Reynolds presented the class gift – outdoor benches for the gym entrance, a donation toward a new wireless sounds system in the main gym, an Automated External Defibrillator (portable heart regulator) for the upstairs area of the high school and a donation to the incoming freshman class.

“Never Forget You” by Lupe Fiasco featuring John Legend was presented as the class song along with the gladiolus as the class flower.

For their class quote they chose: “Take Pride in how far you have come and have faith in how far you can go, for we must not only act, but also dream, not only plan but also believe.” (author unknown). 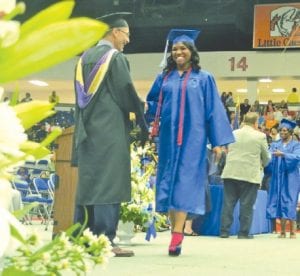 CAHS principal Rory Mattar shakes hands with a graduate as she leaves the stage.

Graduation speaker Jessyca Matthews, a CAHS English teacher and soccer coach, told the students that in 1995 she was sitting exactly where they are – graduating from Carman-Ainsworth High School. Many students have said to her that 1995 was the same year they were born, she said.

In her address, Matthews gave the students some pointers on making good choices in life and refusing to fail.

Allia Howard, class president, led the tassel ceremony, in which the graduates flipped the tassels on their caps from right to left to symbolize their graduate status and transition to adult life. They also donned a pair of sunglasses to symbolize “a future so bright, I got to wear shades.’’ 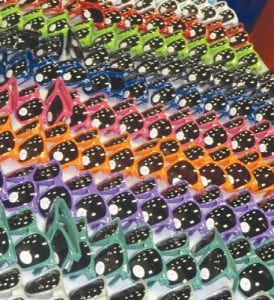 “With a future so bright, they’re gonna need shades,”’ each graduate received a new pair of sunglasses along with a stem of gladioli, the class flower.