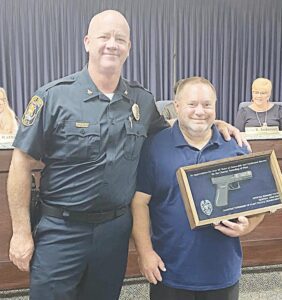 FLINT TWP. — Retired Flint Township police officer Edward Coon received an official proclamation from the township at the Sept. 13 meeting in recognition of 25 years of service. Coon, who was primarily a road patrol officer in the township, played an integral part in the day-to-day operations of the patrol division and was known for his calm demeanor and dedication to his profession.

In addition to the township proclamation, Flint Township Police Chief Kevin Salter presented Coon with the service pistol he used for the past several years on the force.

Coon served in a variety of assignments throughout his career, including roles as a Genesee Valley Mall officer, a field training officer, a firearms instructor and an entry team member for the Flint Township Police Department’s Tactical Team.