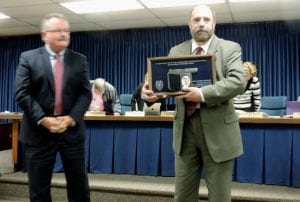 FLINT TWP. — Detective Vern Chontos has retired from the township police department after 25 years of service that included duty in New York City after the 9-11 terrorist attack.

Several past and current officers turned out this week for Chontos’ retirement ceremony at the township board meeting where he was presented his service revolver and badge and a proclamation from the township board.

Chontos was among a group of township officers who volunteered to go to New York City in 2001 to assist the NYC police department in the aftermath of the terrorists attacks that leveled the World Trade Center, killing about 2,606 including police officers and firefighters on the ground.

Chontos also served a stint at Genesee Valley Center shopping mall. Chief Sippert humorously recalled that Chontos bought a pair of black tennis shoes and made it a mission to wear them out walking around the mall.

Chontos began his career with the department on October 1, 1990, starting as a patrol officer. He later served as a field-training officer, firearms instructor and worked with the detective bureau. He served with the Flint Area Narcotics Group (FANG) and most recently with the Genesee Auto Theft Investigation Network (GAIN).

Previously he worked a few years for the Argentine Township and Saginaw police departments.

In addition to the traditional retirement cake and coffee, Chontos received a Proclamation from the township board, read by Township Supervisor Karyn Miller as a permanent record.