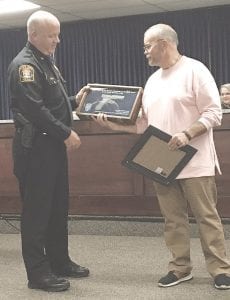 Rye served as an officer for 25 years and was awarded a proclamation for his service by township Supervisor Karyn Miller and his badge and an engraved pistol by Chief Kevin Salter as Flint Township police officers and family and friends looked on.

“So for over 9,000 days, Tom served the residents of this community as a police officer,” he said. “I think that in today’s society being a police officer is one of the hardest jobs to have, and Tom did it for 25 years. I think that says a lot about the type of person Tom is, and it also says a lot about the support he got from friends and family.

“A few days ago, before my hair turned gray and before Tom’s turned gray, Tom was my field training officer,” Salter said. “I learned a lot from Tom and not just from training, but through my career here. So for that, Tom, I want to say thank you for all that you did.”