Officer who helped with 9/11 effort retiring after 25 years 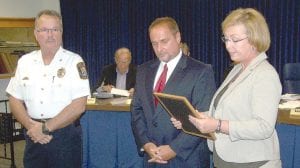 FLINT TWP. — Whether solving crimes at home, or joining fellow officers in New York City to help out after the terrorist attacks 0f Sept. 11, 2001, James Santa said he was just doing his job.

Santa, 52, a detective with the Flint Township Police Department, was recognized for 25 years of service to the community during a retirement ceremony at the township board’s Sept. 6 meeting.

While Santa may have been more humble about his years of service to the community, his boss, Police Chief George Sippert, made it very clear — the retiring Santa will be missed.

“We hired on together, just months apart,” said Sippert. “Through the years we’ve experienced a lot. He’s a real solid guy I’ve come to rely on. I can always count on him being a team player.”

That experience, he said, will be missed in a department that has lost 191 years of experience this year alone with the retirement of several longtime police officers.

“We’ve seen a big transition in the police department,” said Sippert. “It’s a changing of the guard, so to speak.”

Santa has served the department as a patrol officer, undercover drug officer, with the Genesee Valley Mall patrol detail, active shooter training and as a detective.

He was among five Flint Township officers who volunteered to travel to New York City in the days following the 9/11 attacks in 2001 to help out. Santa said he and his colleagues were assigned to traffic and crowd control duty just a block from the scene of the destroyed World Trade Center.

“What you saw on TV didn’t do it justice,” said Santa of the experience of being at Ground Zero just days after the attack. “The destruction to the surrounding buildings was bad. A seven story pile of rubble. We were shocked when we got there.”

Santa said he and the other officers who went were just there doing their jobs and he commended those who remained behind working long hours to cover for their absence.

Santa said he wasn’t sure what he was going to do now, but said he’s too young to completely retire.

He was joined at the ceremony by daughter Natalie, parents Jim and Frances Santa, sister Val Zwerk and niece, Hannah.