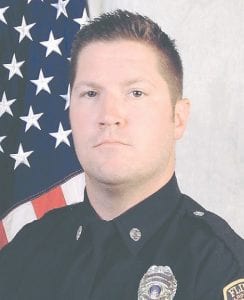 At the March 6 township board meeting. Officers Lacey Lopez and Michael Schuyler were recognized for their lifesaving efforts involving an elderly township man on November 16, 2016 and Officers Barry Wascher and Neal Donovan were cited for saving the life of a township woman on February 11 of this year.

“We like to do these at township board meetings because oftentimes we hear negative things about police officers, not just here in Flint Township but in the entire nation,” Chief Sippert said, noting that officers respond to 911 calls regardless of the status of the caller.

Recounting the incident from last November, involving Officers Lopez and Schuyler, Chief Sippert said that it began about 9:11 p.m. when Officer Schuyler, while on patrol, noticed a man lying on the shoulder of the road near a mail box on West Court Street. 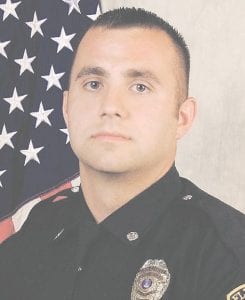 Officer Schuyler used his vehicle headlights to illuminate the man and saw that he was lying on his back and moving. Officer Schuyler called for backup then exited his patrol car to check the man’s breathing and pulse. Officer Lopez arrived on the scene to help, after hearing Schuyler’s call over dispatch. The two officers began administering cardiopulmonary resuscitation (CPR) to the man until emergency personnel arrived. The 65-yearold man was immediately transported to the hospital where he was listed in critical condition and remained for 12 days, Chief Sippert said. The man could not recall what happened to him except for walking to his mailbox. After his recovery, a few months later, he visited the police station to personally thank the officers for their help. 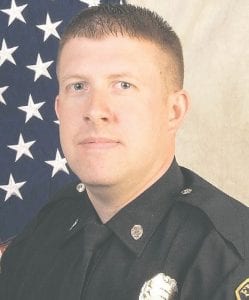 “The officers quick action led to prolonging this man’s life,” Chief Sippert said, when presenting the citations, which were followed by applause and a standing ovation from the audience.

The second incident, which occurred just a few weeks ago, employed the use of Narcan, an anti-heroin overdose remedy that officers began carrying in recent months due to an increase in overdose calls.

At 12:50 a.m. on Feb. 11, Officers Wascher and Donovan were called to a home in the 2100 block of Nerredia Street where a 37-year-old woman had reportedly overdosed on pain medication.

Upon their arrival, the offices spoke with the woman’s father, who also lived there, and learned that she had consumed alcohol, pain medication, and ingested an unknown powder.

She was unconscious. Officer Wascher noticed that she was barely breathing and had a white power under her nostrils. As the officers provided care, they noticed that she stopped breathing. Officer Wascher quickly administered a dose of Narcan in an attempt to restore the woman’s breathing. After observing that this dose had no effect on the woman, Officer Donovan administered a second dose. The woman’s breathing returned and shortly afterwards she regained consciousness. She told officers she had been in a lot of pain and crushed and snorted a pill she has received from a friend, Chief Sippert said. 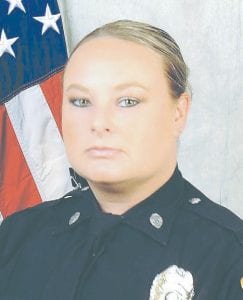 Emergency medical personnel arrived and the woman was taken to a local hospital for treatment. The quick response of both officers led to the survival of the woman, Chief Sippert said. If not for their actions, the woman had gone into respiratory arrest and would not have survived, he said.

Officers Donovan and Wascher also received a standing ovation from the audience, after receiving their citations. 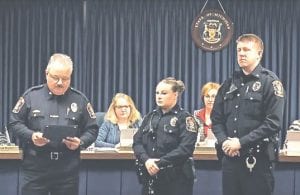 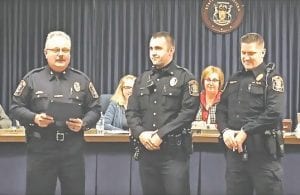