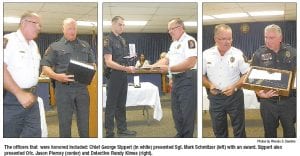 FLINT TWP. — A 16-year-old armed robber could be dead if not for the meritorious actions of Flint Township Police officers Sergeant Mark Schmitzer and Officer Jason Piercey.

They along with Detective Randy Kimes were honored for outstanding police work during the Flint Township Board meeting Monday night. Schmitzer’s retirement also was announced.

In recognizing Piercey and Schmitzer, Police Chief George Sippert recounted an incident on May 9 involving an armed youth who attempted to rob a Pizza Hut employee outside the restaurant on Lennon Road. She provided a description that helped patrolling Officer Piercey spot the suspect walking down Lennon Road.

The suspect fled when spotting the police car but Piercey chased him through the parking lot between Office Depot and Dunham’s sporting goods store.

Sergeant Schmitzer was waiting in his patrol car in Dunham’s parking lot where he spotted the suspect running toward him with a .38 special in his hand, Sippert said.

Leaving his patrol car and drawing his service weapon, Schmitzer ordered the suspect to stop and drop the gun. He issued the command three times before the youngster obeyed but then grabbed the gun again as Officer Piercey approached to handcuff him. Sgt. Schmitzer told him he would kill him if he did not drop the weapon. He obeyed.

“If not for the sergeant’s control, this young man could have easily lost his life,” Sippert said. “Given the circumstances reported, these officers would have been justified in using lethal force to subdue the armed suspect.’’

Piercey’s medal is awarded for an act which involves significant risk to the life of an employee, Sippert said.

“Officer Piercey exited his patrol vehicle and pursued an armed individual who had just committed a violent crime. Had it not been for Officer Piercey’s actions that evening, this individual would not have been captured.”

Schmitzer’s medal recognized his “diligence and perseverance while performing a difficult task under difficult circumstances and goes beyond what is normally expected of most law enforcement members where life has been protected and criminals apprehended,’’ Sippert said.

Schmitzer also received formal recognition for his retirement July 31 after 25 years on the force.

A proclamation from the township board cited his leadership in training entry level officers and other assignments including detective, community police officer, patrol officer and road patrol supervisor.

Schmitzer has received numerous service awards including the Medal of Valor, the Medal of Distinguished Service, a Lifesaving Citation, Citation for Professional Excellence and a Police Chief Commendation.

Schmitzer’s retirement is the department’s 20th in the last three years, Sippert said.

“That’s lots of experience walking out the door but also opens up opportunities for new officers to step up,’’ he said.

Sippert presented to Detective Kimes the Flint Township Police Department’s State of Michigan Law Enforcement Officer of the Year Citation. Kimes received the Police Officers Association of Michigan 2011 Officer of the Year Award for his work leading to the arrest of accused serial killer Elias Abuelazam, who is awaiting trial. Abuelazam is a suspect in the death of an man found dead from multiple stab wounds in the driveway of a restaurant on Miller Road on July 30 of last year.

Kimes also was acknowledged as Genesee County Officer of the Year Citation and recipient of the Optimist Club of Downtown Flint 2011 Officer of the Year Award. He was cited for his role in capturing a serial rapist who abducted women in the parking lots at local malls in 2007.