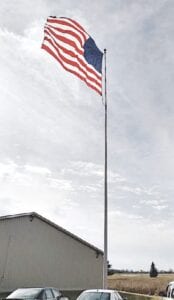 DAVISON — Eleven years ago the city council voted 5-2 to repeal an ordinance creating the position of director of the Department of Public Works, thus eliminating the job and the fact the council had control over hiring and firing of the position.

In the wake of that decision, then-council members established the position of DPW supervisor, which answered directly to the city manager – including say over hiring and firing decisions.

Councilwoman Stacey Kalisz brought up the matter at the councils’ goals and objective meeting in late February and again asked about the subject at the March 8 council meeting.

The topic was raised March 8 when the council was asked to approve minutes from the Feb. 24 goals and objectives meeting. At that time, Kalisz questioned why discussion about the DPW supervisor’s position was not included in those minutes.

“I had mentioned during the goals and objective meeting about the DPW (supervisor), that becoming a department head appointed by city council,” she said. “I don’t see it on the list that was sent over, so I have questions as to why that’s not on there.”

City Manager and Acting Clerk Andrea Schroeder said she misunderstood the conversation and sent Kalisz a text earlier regarding the fact the DPW supervisor is already considered a department head and that there is no longer an ordinance for that.

Kalisz said she understood the current status of the position, but added she thinks it should be changed to an appointed position by the city council., like the police chief, clerk and treasurer.

“That’s a very important part of our city,” she said. “I think one of the job studies done listed that as the third highest job in the city.”

Kalisz went on the say that with the Flint Water Crisis it was apparent DPW director or supervisor is an important position and should answer directly to the city council.

“City managers historically don’t last in the position for very long,” said Kalisz. “They come and go, it’s not a 30-year position. I do think that is a position that should be appointed by the city council.”

Councilman Ron Emery said he thinks it is spelled out in the city charter what positions the city council hires and fires, which includes the city clerk and treasurer. All other employees, he said, are hired by the city manager.

But by the morning following the meeting, the hiring and firing of the position turned out not to be linked so much to the city charter as it was to city ordinance – that ordinance having been repealed on Feb. 22, 2010.

The topic of who hires and fires the DPW supervisor came up after current supervisor Ed Brown announced he will likely retire in the next two years.

Kalisz said she feels strongly the position needs to be under the oversight of the council and if necessary, should go to a vote of the people in order to establish that chain of command.

She also asked the earlier discussion be added to the minutes of the goals and objectives meeting, a motion which was approved by the entire council.

Mayor Tim Bishop said he is not sure what the process is to move forward with action on Kalisz’s request would be.

“Miss Kalisz brought it up at strategic planning for goals and objectives and it may be something you want to look into,” said Bishop. “The process to get there is a whole other discussion, I believe.”

Emery suggested placing the matter in the strategic plan so the city can look into making the position answer to the council instead of the city manager. He said it will require a lot of research and could become a “lengthy process.”

Bishop agreed, suggesting perhaps the matter be added to “maintaining effective services to our citizens” alongside the objective of hiring another full-time police officer.

“The city of Davison is a strong manager, weak council form of government,” said Emery. “There’s reasons why the council doesn’t hire everybody. It’s been that way since the city was incorporated back in the 1930s, and maybe even further back than that.”

He said the council will have to work out a plan, run it by lawyers and then decide on it.

Kalisz said she because this was how it was done previously; she said she thinks it should not be difficult to put the proper procedures back in place to put the DPW supervisor under council management.

She added when the council hires the police, clerk and treasurer, why would the DPW supervisor be left out of that mix?

Bishop asked that Schroeder come back to the council on April 22 with a report with what the history of the position has been and what would be necessary to move the DPW supervisor under council control.

“It’s weird that it’s the only position not hired and fired by council,” said Clark. “If that’s by charter, then cool. But its just a weird thing with one position of particular importance; it’s an oddity that warrants some research.”