Oilers slip away from Cavs in second half 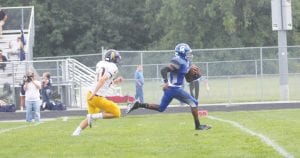 FLINT TWP. – Carman-Ainsworth led for most of the first half and took a three-point lead into halftime, but the Cavaliers wound up dropping a 31-13 decision to Mount Pleasant in a Saginaw Valley League football game last Friday at Carman-Ainsworth Middle School.

The Cavs were up 13-10 at intermission on two long touchdown runs by senior quarterback Josh Jackson. But Mount Pleasant dominated the second half 21-0, leaving Carman-Ainsworth at 0-2 for the season and 0-1 in the SVL.

The Cavs took a 7-0 lead with 4:49 left in the first quarter when Jackson broke through the left side and ran 40 yards untouched to the end zone. Belal Khoulani kicked the extra point.

Late in the quarter, Mount Pleasant partially blocked a punt from the Carman-Ainsworth end zone and took over the ball at the Cavs’ 10-yard line. But the Cavs’ defense stiffened and held the Oilers to a 23-yard field goal by Connor Fiolek just 10 seconds into the second quarter.

A dropped pass on fourth down killed a Carman-Ainsworth drive later in the quarter, then Mount Pleasant caught a break when a tipped pass fell right into the arms of Obie Ricumstrict for a 34-yard gain to the Cavs’ 13. Moments later, Kalebb Perry ran 13 yards straight up the middle for a 10-7 Mount Pleasant lead with 1:45 left in the half.

The Oilers’ lead lasted just 55 seconds, though, as Jackson again broke a long touchdown run, starting left and then cutting back to go 82 yards for a 13-10 Carman-Ainsworth lead with 50 seconds before intermission.

The second half was all Mount Pleasant, and the Oilers took the lead for good on Perry’s 68-yard touchdown gallop with 10:22 left in the third quarter. Jacob Mogg added a 32-yard scoring run at the 5:33 mark to give the Oilers a 24-13 lead.

Despite outgaining Mount Pleasant 294-264 in total yardage for the game, Carman-Ainsworth rarely threatened in the second half, and the Oilers sealed the victory with a 1-yard touchdown run by Mogg with 2:32 left.

Jackson carried 11 times for 139 yards and Jalen Lewis added 59 yards on eight carries as the Cavs totaled 200 yards on the ground. Jackson also hit 16 of 28 passes for 94 yards, with Logan Banister catching six for 56 yards. Caylen Jones had five catches for 22 yards and Cahlil Brownlee grabbed five for 16 yards. Banister also had 75 yards on kick and punt returns.

Carman-Ainsworth will visit Davison for another SVL game Friday.