City accepting applications for open seat until May 14 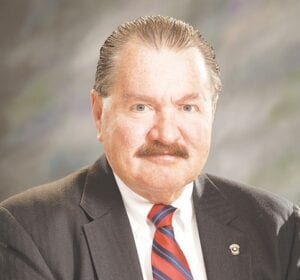 O’Keefe, who was nearing the end of his second full term on the council following his re-election in 2017, told the council he was resigning less than 15 minutes into Monday’s council meeting.

He started out apologizing to his fellow councilmembers and the residents but said ongoing health issues faced by his wife, after both contracted COVID-19 earlier this year, led to his decision.

“My wife has had health issues the last three years and now it is very serious,” he told the council. “We were in intensive care at same time and I got to come home, while she went to (assisted living) because I was unable to care for her.”

O’Keefe said his wife is home now but caring for her will interfere in his council duties, so he said he decided to resign from the position.

“The best thing to do is resign immediately,” he said. “I’d like to thank the council and residents. It is impossible for me to wait until November, especially with budget time coming up.”

President Steve Heffner thanked O’Keefe for his service to the community, calling him a “shining beacon” to the entire council.

“You have to do what is right for you,” said Heffner. “Best wishes…this is a sad day for the city of Burton.”

“We’re going to miss him,” said Councilman Vaughn Smith. “He did a good job.”

O’Keefe had been attending the meeting via Webex and immediately logged out after his announcement, leaving the council to continue the without him.

Last re-elected in 2017, O’Keefe’s term would have ended in November. The council is accepting applications at city hall until 5 p.m. May 14 and plans to appoint a replacement for O’Keefe at its May 17 meeting.

The person appointed will finish the remaining months of the term with a permanent replacement to be elected by voters this fall.