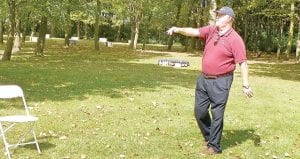 Chris Hamilton, executive director of Old Newsboys, particpates in a football toss, showing off his form from his days playing for the 1967 Purdue Uni

FLINT TWP. —Remember old-fashioned fun at bygone company picnics like potato sack races and other children’s games that were not electronic or hand held.

Julie Blalock, owner of Kickin’ Catering in Flushing, hoped to bring some of that back by organizing the first Genesee County Family Picnic last Saturday at the UAW Local 598 Union City Recreation Area on Torrey Road — a fundraiser for Old Newsboys.

Turnout was lower than anticipated but Blalock said she plans to reserve the park for the same time next year.

“The Crim started with one race. Look at it now. Each year it grows,’’ she said, referring to the annual road race that now draws thousands of people to downtown Flint.

Blalock wasn’t quite hoping for CRIM-sized crowds but she worked hard at getting the word out, including distributing fliers in the Mt. Morris, Clio and Carman-Ainsworth school districts.

Most of the activities were free, food was reasonably priced and entertainment included an appearance by Brianna Miller of Fenton, this year’s youth division winner of the National Cherry Festival IDOL contest in Traverse City. 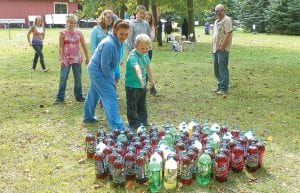 At left, kids participate in ring toss, one of many old-fashioned children’s games at the first annual Genesee County Family Picnic on Saturday, a fundraiser for Old Newsboys.

“I’ve been planning it since May,’’ Blalock said of the fundraiser. 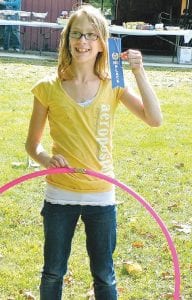 The winner of the hula hoop contest is Kennidy Coburn, 12, (above) a student at Durand Middle School.

Now all that’s needed is more people to enjoy it.

“We’re going to book the same location for next year,” Blalock said.