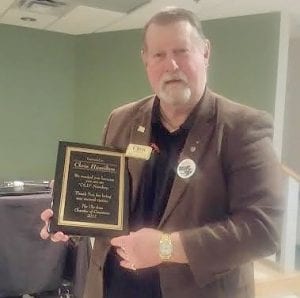 Chris Hamilton was presented a plaque for his dedication as executive director of the Old Newsboys at the recent roast of him.

CLIO — Friends came together to talk about the efforts of Chris Hamilton to raise money for Old News Boys – and along the way they took a few comical jabs at the man who has led the local organization for several years now.

Hamilton, executive director of the Old Newsboys of Flint, was roasted Jan. 12 at the Clio Area Senior Center.

Friends and fellow chamber members gathered to have some fun, at Hamilton’s expense, while telling personal stories about the man who has become synonymous with the Old News Boy organization.

“Any way we can raise money, I’m all for it,” said Hamilton. “Lots of nice people said lots of nice things about me.”

He also said Hamilton was 6’6’ and weighed 300 pounds in high school, but was unable to play football.

“He was poking fun of me,” said Hamilton. “My brother and I were both on Purdue’s only Rose Bowl winning team in 1967.”

Andy Suski, who owns Suski Chevrolet in Birch Run and is on the board of directors for the Old Newsboys, said Hamilton was cheap. He said Hamilton was the only person he did not want to sell a car to and called him “low down and underhanded.”

“He was making a joke,” said Hamilton, “There’s nobody cheaper than a car salesman.”

On the other hand, Suski said there had never been anyone to walk into the Old Newsboys office and warehouse on Taylor Road in Flint and be told there was nothing left.

“That’s very true,” said Hamilton. “Not only do we buy for more people than we anticipate helping, but our motto is ‘Let no child be forgotten.’ By any means, we make sure no child is forgotten. This past year we gave presents to 6,468 kids, and have given gifts to up to 20,000 children in a year.”

John Gleason, Genesee County clerk and register of deeds, told a story in which a young boy swallowed a nickel. In the story, the boy’s dad told the mom to call Chris Hamilton because he could get money out of anyone.

“They were all compliments,” said Hamilton. “It was a funny way of saying it. I’ve got no problem asking for money in any situation.”

Many of the roasters talked about a time when General Motors plant employees were the main contributors to the Old Newsboys.

Hamilton said at that time, because the General Motors employees’ donations were so large, the Old Newsboys did not have to do any outside fundraisers, besides the newspaper sales. At one time, every employee of the GM AC Spark Plug plant gave the organization their bonus checks. He said the closing of most of the General Motors plants has had an effect on the Old Newsboys.

Nonetheless, the Old Newsboys continue to help brighten the lives of those in need. The association hit a milestone in 2015 when it had provided gifts to more than 80,000 needy kids since its creation in 1924.

Lisa Kirk, one of Hamilton’s employees at the Old Newsboys, offered back her winnings in the 50/50 raffle held at the event to the Old Newsboys. So, the raffle raised about $220.

There was a full houseful of guests who paid $35 each to attend the roast. The roast raised about $1,000. So, Hamilton said he felt good about the event’s success.

“It wasn’t too bad,” said Hamilton. “It was very special actually. I’m looking forward to poking fun of the next roast recipient.”