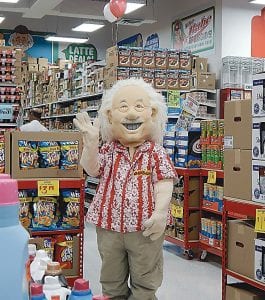 Ollie’s cheerful mascot as well as several top management officials including the company president and Tigers great Al Kaline were on hand to launch the Flint grand opening of the bargain outlet store on Aug. 14.

FLINT TWP. — After standing vacant for about six years since the Furniture Express store closed, one of the township’s larger big-box store at 5038 Miller Road, is back in business with the opening of Ollie’s Bargain Outlet on August 14 in the Mill Creek Shopping Center

Founded in 1982, Pennsylvania-based Ollie’s Bargain Outlets is one of the nation’s largest retailers of closeouts, excess inventory, and salvage merchandise, with 144 stores in 13 states and a growing presence in Mid-Michigan including a store in Lansing that opened last month and another coming soon in Saginaw.

“We buy a lot of merchandise cheaper and pass the savings on to our customers,’’ said Jim Geers, store manager. The store stocks a wide variety of wares including health and beauty products, books, snack foods, bedding, flooring, electronics, toys and luggage.

But Geers advises shoppers that the inventory constantly changes.

“I tell people when they see something they want, to buy it because it may not be here next week,’’ he said.

The store hired 52 employees, he said.

Geers also noted that shoppers started lining up the night before for a chance to get tickets to meet former Detroit Tigers great Al Kaline, who was brought in as part of the grand-opening celebration.

The 250 available tickets were distributed in a matter of minutes at 7:30 a.m. and was the largest distribution ever for an Ollie’s store opening, he said, adding that there were probably about 253 people in line.

Brian Bur of Swartz Creek, a Delphi retiree, was first in line, arriving at about 3:45 a.m. carrying a special Tiger’s jersey already signed by Willie Horton. He was all smiles at 10 a.m. when Kaline added his signature to the keepsake jersey.

Bur, who said he is getting ready to run his 32nd Crim Road Race, won the jersey in a Crim auction.

Bur’s friend and former Delphi coworker, Wayne Rood of Flint Township, was second in line. He brought a special baseball glove for Kaline to sign.

Tom Wyroba of Detroit, was number 90 in line. He said he left home at 5:30 a.m. and arrived at the Flint Township store about 6:30 a.m. for a chance to say hello to his boyhood idol and get a batting helmet signed.

Wyroba, 64, who was wearing his Tiger’s jacket, said he’s met Kaline before and has gone to the Tiger’s spring training in Florida for the past 42 years.

Kaline was only visiting for one day but Ollie’s will be open seven days a week, Geers said. The store offers a customer loyalty program and publishes sales flyers on its website at www.olliesbargainoutlet.com

“We are excited to expand our footprint in the great state of Michigan where the folks have been so good to us,” said Mark Butler, president and CEO of Ollie’s Bargain Outlet, in a press release. “I couldn’t be prouder to have Al Kaline join our team at the grand opening. He is truly a sports legend and we’re glad that fans in Flint (had) the opportunity to meet him at our store.”