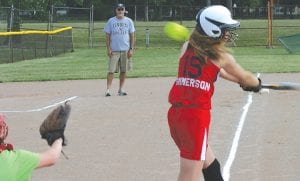 Linden’s Simmerson (No. 15) misses at the plate during Flint Olympian action on Tuesday.

FLINT — With the softball playoffs for the 56th annual Flint Olympian Games having started on Monday and the championship games taking place yesterday after we went to press, this year’s regular-season was one filled with madness and Mayhem in all three divisions. This includes the 15U Mayhem, who beat out Linden, American Associates, the Bendle Tigers, the Clio Mustangs and Phillips RV for first place in their age group.

The Mayhem Black were just as successful in 18U middle/lower league play, coming in second was Rowe PSC and the Powers Chargers were third. That left Fellowship Lodge #490 in the fourth spot, Chapman Concrete was fifth and grabbing the sixth, seventh and eighth positions, respectively, were the Avalanche, LakeVille and the Chippewas.

As for the Mayhen Red, that squad ruled the 18U upper league standings despite the best efforts of teams such as Creek Auto, the Firestix and the Linden Eagles. That left Montrose in the fifth slot and rounding things out was Flushing.

In adult tennis competition, on July 21 the big winner was Jim Neubauer, who took gold in the Men’s Open division followed by Erin Bracciano and Kris Mindlin, as well as downing Mindlin, 3-6, 6-2, 6-0, for the Men’s 35 and over title. Neubauer also got the better of Mindlin, 6-1, 6-2, to win the Men’s Open championship and Bracciano was third with a 6-0, retired, win over Kevin Smith, Kevin George stood atop the Men’s Open Back Draw field after posting a 6-2, 6-2 victory against Stephen Pollack and a 6-2, 6-4 defeat of David Rowe, who beat Justin Thomas, 6-3, 6-2, to grab the bronze medal.

On July 12 in boys’ 21-and-under bowling, Quinton Burnett put up a 727 to roll his way to first place, Shamonica Simon laid down a 690 to claim the girls’ 21-and-under title and edging out Jordan Nunn by 20 points with a score of 679 in the boys’ 15U division was Brendan Adams. Imari Blond won the girls’ 15U category after knocking down 423 pins.

There were big hopes for the volleyball portion of the Flint Olympian Games on July 9-10, but because there was only enough of a turnout to hold the 18U contests, Genesee was the lone champion followed by Smoked Ink and Carman-Ainsworth.