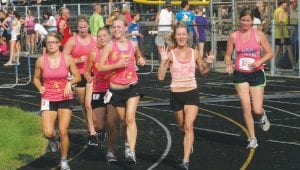 The race, which is in its ninth year, is held in Kayla’s honor. She passed away after a car accident that also injured her twin sister Kaitlin and friend Danielle Bila.

Kaitlin is one of a group of six friends who normally get together for the event. Former teammates in cross country and/ or track, the group is now living all over the state and out of state. Janee (Jones) Elsworth, another member of the group, ran in both the 10 and 5K races this year. Kelsey Meyers competed in the 5K in the 20-24 age group finishing in eighth place with a time of 26:36.1.

Three other members of the group, however, didn’t run this year. Kelsey Krych did help out with the registration for the races, but Sam Minkler was not able to get back from her new home in Minnesota.

A poignant moment that many took note of this year was Kaitlin O’Mara finishing the race all alone. Since the race’s inception, the core group of six—Kaitlin, Krych, Myers, Jones, Minkler and Bila— would join hands and cross the finish line all at the same time in honor of Kayla, sporting matching hand-painted sports tops with Kayla’s name all over them. The passage of time, with the race about to mark its 10 year anniversary in 2015, was not lost on many in the race and watching from the sidelines.

Three other runners with Goodrich ties finished in the top 12 in the women’s 20-24 race. Emily Francis finished first, Ashley Short was sixth and Katie Bradley 12th.

Goodrich’s Jennifer Eisinger finished just ahead of (Jones) Elsworth in the 25-29 division, taking 17th overall. Two other ladies with area ties placed in the 20-24 division.

Lapeer’s Angela Larson was fifth and Metamora’s Ashley Corriveau was 11th in the 20-24 division. Goodrich residents, Elizabeth Kippe and Nicole Danz, received two of the four annual scholarship awards. The other winners were Grand Blanc’s Nicholas Voth and Saline’s Connor Loftus. The scholarship has been handed out every year since the race’s inception.

For all the official race results visit www.runmichigan.com or kaylarun.com. — K.W.