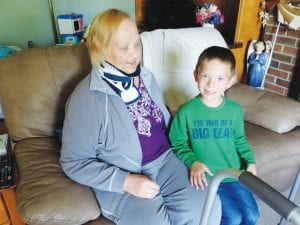 Jackson Schultz, age 5, a C-A kindergartner, cuddles with his grandmother, Margaret Jabs who is recovering from a rollover automobile accident in mid-August that they both survived.

FLINT TWP. — To the average 5-year-old boy, a hero probably describes an adult in his life or maybe a comic book character, but Jackson Schultz fits the bill himself, at least in the eyes of his grandmother Margaret Jabs.

Jabs still get choked up when describing her grandson’s bravery and composure after they were in a car accident on Aug. 15 in which she was severely injured and knocked unconscious.

Jabs said police later told her that her vehicle rolled several times after being broadsided at the intersection of Hemphill Road and Grand Traverse Avenue in Flint.

Jackson sustained only minor injuries including a facial cut and bruised leg but he had to be cut from the wreckage and lifted out of a window.

Crying because he feared for his Oma, which is what he calls Jabs, meaning grandmother in German, Jackson was able to tell authorities his name and address, Jabs’ name, his parents’ names and their telephone numbers.

Jabs thinks that’s pretty impressive for a five-year-old. She still wears a neck brace and is undergoing therapy as a result of the accident in which she suffered multiple fractures. She’s on medical leave from her job as a secretary for Carman-Ainsworth’s Student Support and Special Services.

But Jackson, who started kindergarten at a Carman-Ainsworth elementary school three weeks ago, has bounced back well.

He’s more interested in playing a Sponge Bob game on his ipad than talking about the accident.

But prodded by his Oma, he recounted his memory of the accident and spending a long time at the hospital with his parents anxiously waiting for news of his Oma’s condition.

Jabs and Jackson were headed to the Great Lakes Tech Center for a Back to the Bricks event when the accident happened, she said.

“I am just so proud of Jackson,’’ said Jabs, beaming at her precocious grandson. Jackson just smiled and went back to his Sponge Bob game.