One dead and three injured in house fire 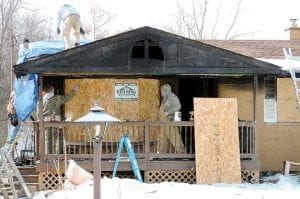 A house fire in the 1100 block of Lask Drive left one woman dead and three injured.

FLINT TWP. — Fire official have identified Tiffany Dorman, 29, as the victim who died last week in a house fire in the 1100 block of Lask Drive off Beecher Road.

Her two sons, ages 2 and 11, and her boyfriend were hospitalized as a result of smoke inhalation from the early Wednesday morning blaze.

State investigators have pinpointed the source of the fire as smoking materials that started in the garage. The home was a total loss but did have working fire detectors that sounded during and after the blaze, Ringwelski said.

Firefighters were hindered by the location of the closest fire hydrant being about 1,100 feet away at the southeast corner of Lask and Beecher Road. But water was brought in by tanker truck and “a constant water supply was maintained during the entire fire attack,” Ringwelski said.

There are no fire hydrants in the subdivision because all the homes rely on wells, he said.

The older child is a student at Randels Elementary.

The school community has come together to support this family in the wake of this tragedy, said Steve Tunnicliff, superintendent of Carman- Ainsworth Schools.

A hat day at Randels and at CAMS held on Friday raised more than $500, said Bonnie Haffajee, Randels principal.

They also are planning a benefit spaghetti dinner on Thursday, March 13 from 5:30-7:30 p.m. and will be asking for a donation of $2 per plate.

A bottle drive will be held next week and a Root Beer float day on March 12. Teachers are helping by making meals for the family and donations have come in from all over Flint Township, Haffajee said.

A collection also is being handled by employees at the Buffalo Wild Wings in Fenton where Dorman worked.

The family has medical bills and will need to replace everything they lost, according to a posting on Face-book which has a list of clothing sizes.

Anyone wanting to help can send an email to info@tiffanydorman.org or text to 810-515-9938

An Everyday Hero: Monica HolmesRotary Student of the Month: Elizabeth DupuisOut of the past