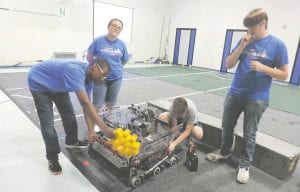 Byzjon Speights, Katie McGilvery and Jacob White (left to right in the blue shirts) were among team members in the gym putting three seasons of robots through their paces.

FLINT TWP. — School’s out for the summer but there is no off-season for Big Mo — the robotics team at Carman-Ainsworth High School.

Most recently, the crew showed off their skills and accomplishments at an open house last week at Atlantis Alternative High School. The weekend before that they appeared at the Sloan Auto Fair.

Next up is participation in the 4th annual ROBO-CON Festival of Robotics and STEM Learning in Lapeer on July 22. Then it’s on to Back to the Bricks in August, a yard sale fundraiser and an off-season competition in September at Kettering University.

“The C-A robotics team is more than just a robot,” said Ellen Crain, team coach. “We do have a full business side, a full technical side and a full community outreach side.”

It is a way to inspire young people to pursue a future path in STEAM – adding Arts to the current focus on STEM — science, engineering, technology and math — education. The artsy part includes web design, creating a team logo and brochures, branding and more, Crain said. 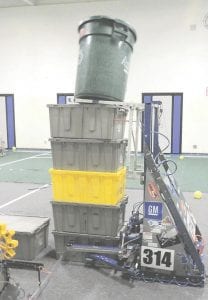 The robot from the 2015 competition “Recycle Rush” still is going strong, lifting and stacking crates and waste cans.

At the open house, visitors got to visit a business room to find out how robotics competitions work; a build room to see how the students put the robots together and the demonstration room set up in the gym where young people were given an opportunity to drive one of the robots actually used in competition.

Shayne Osborn, Katie McGilvery, Byzjon Speights and Jason White, all 12 graders in the fall, were among the Big Mo members on hand to describe their design process and competition strategies.

One of their ingenious designs used a simple pulley strategy to get their 120- pound robot to score points by climbing a rope in under two seconds at the end of match play,

“We were one of the fastest climbers of all the robots,” White said.

Robotics competition season begins in January when the game is released and teams have about six weeks to design, build and ready their robots for competition that begins in March.

The 2017 team won a regional match and competed at the state and world levels.

Big Mo currently has 16 members but several of them are graduating next year. So, one of the purposes of the Open House was to recruit new members, Crain said.

For more information, visit the team web site at www.bigmo314.com/