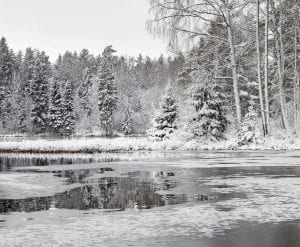 LAPEER COUNTY — Open water fishing for pike and panfish is a good bet this time of year. Areas to the north may be making skim ice at night but there is no safe ice to report.

Lake Erie: Some perch were caught
in the Metro Park Marina. Walleye
fishing slowed.
Huron River: Steelhead were caught
up near the dam at Flat Rock.
Those fishing in the marina at the
mouth caught a good number of
bluegills.
Detroit River: Was still producing
walleye and perch. Walleye anglers
were fishing between the Ford
Yacht Club and Celeron Island or
near the Trenton Power Plant.
Lake St. Clair: Those targeting muskie had success at the mouth of
the North Channel and near Grassy
Island. Anglers were also casting
in Anchor Bay off Grassy Island
for muskie and smallmouth bass.
Muskie season on the lake will
close on December 15.
St. Clair River: The few boats out
have caught a couple walleye at
night. Shore anglers were also taking a few fish.
Saginaw Bay: Had reports of yellow
perch being caught. No specific
locations but anglers might want
to try the cuts and canals. There
have been reports of walleye being
caught by boat anglers. Rumor
has it perch were caught in the
Quanicassee River, Thomas Cut
and the lower Sebewaing River.
Mornings were best. At Caseville,
some lake trout were caught in the
lower Pigeon River. This is a Type-
3 stream so it is legal to keep lake
trout this time of year.
Saginaw River: Also had reports of
some walleye caught.
Tittabawassee River: Had rumors of
decent walleye fishing.
Flint River: Catch rates for walleye
increased.
Southwest Lower Peninsula
Saugatuck: A few whitefish were
caught by pier anglers using jigging
spoons or single eggs fished on
the bottom.
Grand Haven: Pier anglers continue
to catch whitefish. Jigging spoons
were the ticket.

Grand River at Grand Rapids:
Continues to produce steelhead
especially up near the Sixth Street
Dam.
Grand River at Lansing: A couple
nice walleye were caught on the
north end near the Brenke Ladder.
Muskegon: Pier anglers caught whitefish and the occasional steelhead.
Muskegon River: Water levels were
decent and those fishing continue
to catch some nice steelhead.
Boat anglers were swinging flies
and shore anglers are floating
spawn.

Thunder Bay River: Was producing
a few Atlantic salmon and brown
trout. Whitefish moved to the reefs
in the bay.
Houghton Lake: Shore anglers have
caught walleye and pike at night
when casting crank baits in the
canals and along the shoreline.

Tawas: Had rumors of moderate
whitefish activity. Those fishing the
state dock were still taking some
fish.

This area of the state had little activity. Steelhead fishing picked up
with the last rain however arctic
temperatures will not only slow
fishing but make it much harder to
do so.
Manistee Lake: The coho salmon
action was slow but steady. A few
more steelhead have been picked
up as well. Trolling the deeper
waters has turned out more steelhead, while shallower waters have
produced coho. The lake remains
completely open with no ice to
report.
Big Manistee River: Water temperatures are continuing to drop
and water levels are up. Water
clarity is down and anglers have

been catching fish well into the
afternoon. Floating spawn from
Tippy Dam all the way down to
M-55 Bridge has yielded a steady
number of steelhead. A few coho
remain at the dam, but numbers
have decreased. Pere Marquette
River: Water levels are up here
as well and clarity is down which
makes for better fishing. Fresh fish
are in the river. Most are using
spawn or fly fishing.
Pentwater: Pier anglers caught a couple steelhead.

Menominee River: Those fishing
below the Hattie Street Dam have
caught whitefish on wax worms
or steelhead and brown trout on
cast-masters.
Little Bay De Noc: Had a decent
perch bite in the shallows. Perch
rigs with minnows worked best.