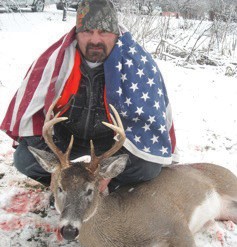 Jason Blanton bagged this nice 8-point buck along with a doe during the hunt.

NORTH BRANCH
— What began as a coalition effort between the Mayville Lions and Marlette VFW three years ago has turned into a rewarding outlet for area hunters and landowners to help injured soldiers reintegrate back into everyday life.

On December 11 and 12, local guide Roger Wilcox worked with that very same coalition to host 22 injured veterans, who had served in Iraq and Afghanistan. For Wilcox, this is nothing new. He’s worked with local Wheelin’ Team 457 of North Branch for six years guiding turkey, deer, goose, pheasant and duck hunts for hunters with disabilities.

“This was a very successful hunt with quite a few does taken and one really nice buck,” Wilcox reported after the hunt.

Al Hogan is Director for Operation Injured Solider and Dr. Richard Horsch, a Vietnam war MASH unit director of operative services. Wilcox had contacted them to help more veterans get involved in hunting after their return home.

“OIS started with Wheelin’ Team 457 three years ago,” Horsch said. “Through Wheelin’ Team and Roger (Wilcox) we hooked up with OIS and soldiers injured in Afghanistan and Iraq and trying to integrate back into society.”

Horsch said that a nice 8-point buck was taken by the veterans in the past two years and that the overall coalition of organizations now have a greater number of hunters and need more places for them to hunt.

“Considering how beat up and injured they are, it’s just a privilege and honor to have these guys around,” said Horsch of the soldier/hunters. “We had 22 guys and put them all in a 2-bedroom house. We felt bad about no TV and cable, but they said they could talk with each other about their injuries and experiences that they just can’t talk about it with others yet. I ran the operative section of a MASH unit in Vietnam, so I understand where this comes from.”

Along with the common bonds and camaraderie, Horsch said the soliders take away much more from the hunt.

“I think what they get out of this is realizing that people really care about them, and the socializing of talking with others in the same position or possibly the same injuries as them,” Horsch said.

“We started with a turkey hunt, then goose a hunt, then the wheelchair hunt, and there are so many deserving vets, but we just don’t have the land for them to hunt. It’s a way for people to give back for those who can’t otherwise,” Horsch said.

“Roger has done an incredible job, giving hundreds of hours of his time. He’s a big hunter and I’m sure would rather be out hunting, but he just does a fantastic job with the guys in wheelchairs and their hunts.”

Wilcox said it’s just about helping a fellow hunter get back out and enjoy the outdoors.

“We don’t talk about their injuries or their circumstances,” Wilcox said. “It’s our way of helping them to heal from the inside out.”

This time around, injured soldier Jason Blanton shot his first-ever deer bagging a nice doe and the 8- point buck. He proudly wore the American flag over his shoulders as he showed off his buck. He won a scope and free shoulder mount of the buck.

For anyone wishing to help an injured solider get involved in future hunts or more importantly, if you have land to donate, contact Wilcox at 810-338-0880.