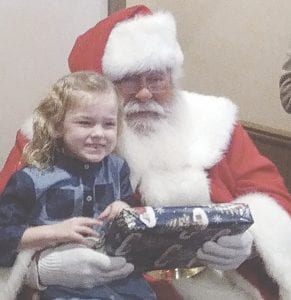 Youngsters from the Michigan School for the Deaf were treated to a special breakfast with Santa compliments of the West Flint Optimist Club. Photos by Lania Rocha

CLAYTON TOWNSHIP — Elliette, dressed in a new red and white snowflakethemed sweater dress and leggings, danced about, beaming with anticipation.

Santa was on his way, and Elliette wanted to ring the sleigh bells he would bring, so she could feel the percussion of the bells’ distinctive jingle.

Elliette and 33 classmates from Michigan School for the Deaf were guests of the West Flint Optimist Club on Thursday, Dec. 12, at Valley Breakfast and Bistro.

Club members have hosted the Breakfast with Santa event for about 40 years.

In this setting, Santa uses simple sign language to communicate with the children. He also presents every child with a present.

“It’s special because Santa has gifts and he signs,” said Sifferman. “The kids don’t get that out in public, that opportunity to really speak to Santa. That’s what makes it so special.”

“The kids enjoy being here with their friends, and they really love Santa,” said Jodi Harrington, who attended the event with her daughter, Faith. “Nowhere else does Santa hand them a gift to open. And it’s so nice that he brings the bells so they kids can feel the vibration.”

The Optimist Club’s focus is youth, and doing whatever they can to “support, encourage and empower them,” said Hilliker.

Club members help ring bells for the Salvation Army, provide meals for athletes participating in the CANUSA games, and provide $5,000 worth of scholarships annually for students at the University of Michigan – Flint.

They also sponsor oratorical and essay contests for high school students, and they’re working on starting those contests for students who are hearing impaired.

“We do all we can,” said club Treasurer Jeff Dennings. “We do a lot for a small club.”