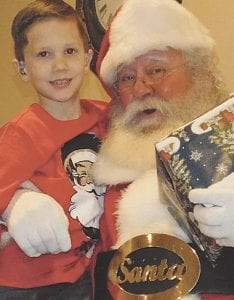 Bentley Wescoat and Max Beaver, students at Michigan School for the Deaf, meet with Santa Claus during breakfast with Santa, sponsored by the West Flint Optimist Club. Photos by Lania Rocha

For more than 30 years, the West Flint Optimist Club has hosted breakfast with Santa for youngsters who attend the Michigan School for the Deaf. On Dec. 20, 38 children had the chance to meet Santa and communicate their Christmas wishes in sign language.

“The two most important signs are ‘Merry Christmas,’ and ‘Santa loves you,’” said Santa, who distributed gifts to the youngsters at Valley Breakfast and Bistro in Clayton Township.

“They are so special; and they are so appreciative,” he said. “The Optimists make all of this happen, and I am humbled by what they do. I look forward to this every year.”

Optimist Greg Hillaker said the West Flint Optimist Club forged a bond with the Michigan School for the Deaf many years ago.

“Many of our club members have taken classes to learn sign language and we’d have pizza parties and play volleyball, but this is a real treat,” Hillaker said. “For some members of the club, this is their favorite activity, just coming in and watching these kids.” 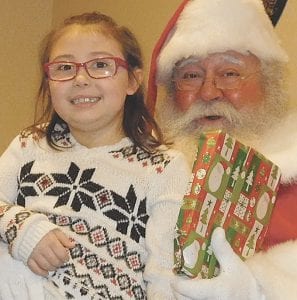 Club members provide the gifts which they select specifically for the children whose names they draw. Participating members pick two or three names, Hillaker said.

“It’s an incredible feeling,” said Optimist Jeff Dennings. “It’s unmatched. It makes you tear up. It’s special, very special. This, the unselfishness, is what Christmas is about.”

Heather Golob of Saginaw attended the breakfast with her four children, all of whom are deaf.

“I’m very grateful,” said Golob, who also is deaf. “It feels good to have all of the families together. The kids are always excited; they think it’s wonderful.”

Golob’s children have visited Santa at stores, but the Optimists’ breakfast offers a different experience, she said.

“This is a more personal encounter,” she said. “It’s a more comfortable feeling, like family.”

Optimist Peter Venos said he is one of the club members who considers the Santa breakfast the best club activity of the year.

“To see the expressions on the kids’ faces is worth all the energy we put into this program,” Venos said.

Although he can communicate with the children through sign language, Santa said technology is helping some youngsters hear some of the sounds of the season.

“When I first started coming here, none of the kids could hear,” he said. “They could only feel the vibration of the bells. But with the technology they have now, some of the kids can hear the bells.”