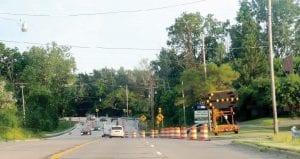 “Not the dreaded orange barrels again” was probably the reaction of many motorists to this restricted travel view on Ballenger Highway last week. But a painting project should be complete by now and the roadway fully reopened.

But unlike last year’s three-month closure of that stretch of road while the Ballenger Highway Bridge was being replaced, this traffic interruption was scheduled to last only about a week while the new bridge was being painted.

The painting project was scheduled to begin Monday, June 13 and be completed in about one week, according to the official notice from the Genesee County Road Commission. That means that travel should be back to normal by now. The road was not totally closed last week but shut down to one lane of travel in each direction, perhaps causing slight delays for those who travel that road regularly.