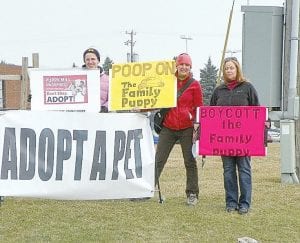 Protesting in front of Family Puppy at the Genesee Valley Center last weekend are, from left, Alicia Handlin, Pam Sordyl and Amy Systek.

FLINT TWP. — A signcarrying group of animalrights protesters continued their campaign at the entrance to Genesee Valley Center on Saturday.

Staging rallies outside of The Family Puppy stores is part of a petition launched two weeks ago by The Puppy Mill Awareness Meetup to urge “Michigan’s largest puppy-retailer, The Family Puppy, to stop selling puppies and start supporting adoptions instead.”

In a press release, the group directs supporters to sign a petition at www.change.org/petitions/te ll-the-family-puppy-to-stopselling puppies. More than 500 signatures have been collected so far, according to information on the website.

“We are asking the public to learn the facts about this store’s breeders and avoid contributing to the cruel pet trade.” said Pam Sordyl, the group’s founder.

To assist consumers, the group has published “The Family Puppy Breeder Fact Sheet” outlining 11 important things they believe puppy buyers should know. It can be found online at files.meetup.com/1258 100/The%20Family%20Pupp y%20Breeder%20Fact%20Sh eet_ v3.pdf

John Stottele, owner of the five The Family Puppy stores in southeastern Michigan, refutes those claims. He said the group has been picketing the store since it opened in December 2009.

He has had conversations with Sordyl whose stance is too many dogs are being euthanized for lack of adoptions and that dogs should only be obtained from shelters, he said.

“We don’t believe that that’s fair for our consumers to not have an option,” Stottele said, adding not every family has the expertise or desire to rehabilitate an older dog.

“We have 30 to 40 different breeds. We help match the right breed with their families needs,” Stottele said.

He noted that his stores only sell family-friendly dogs and Akitas and Rottweilers are among about 50 breeds they have chosen not to sell.

“I don’t know of a customer who is not happy,” he said.

His care procedures include having a veterinarian check the animals weekly. He also offers 30 days of free medical care to buyers should their animal have problems, a oneyear guarantee against congenital defects and a lifetime guarantee against parvovirus.

In 13 years of business, The Family Puppy has helped more than 20,000 families find their dream pet, Stottele said, noting that testimonies are published on the company’s Facebook page at www.facebook.com/people/The-Family-Puppy- Flint/100001880642697.

Stottele said he personally visits breeders to inspect animal living conditions and to handpick puppies for their stores. He said pictures and inspection reports from their breeders are posted in the store.