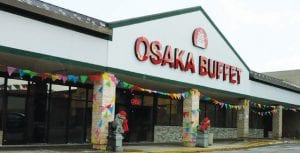 A colorful pennant banner is draped across the front of Osaka Buffet to let diners know it is now open for business.

FLINT TWP. — New and improved is the word for Osaka Buffet which opened January 15 at G-3583 Miller Road, in the Genesee Crossing Shopping Center, after several months of interior renovation.

The Flint & Genesee Chamber of Commerce is set to welcome the new business with a ribbon-cutting ceremony at 11 a.m. on Thursday, January 29.

“We serve high quality food; everything is fresh,’’ he said.

Lunch is $7.99 and dinner is $13.99. Prices reflect the fresh quality of the food, Weng said. A liquor license is pending.

He has 20 employees and still is hiring.