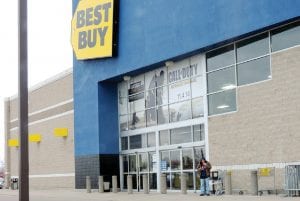 In past years, lines have begun forming outside of the Best Buy electronics store as early as the Monday before Thanksgiving when Black Friday bargain hunters pitch tents and camp out to be first in line for door buster deals. But this photo taken outside the Miller Road store late Tuesday afternoon indicated that either the camping tradition is dying out or something else is amiss. A second check very early Wednesday morning also found no lines. Other media elsewhere also were reporting shorter lines outside Best Buy stores. Best Buy opened at 5 p.m. on Thanksgiving Day.