Out with the old, in with New You 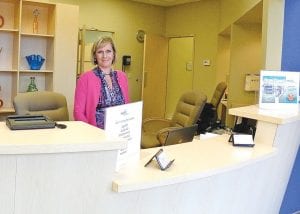 Donna Buscemi of Goodrich is office manager at New You dental office, 4307 Miller Rd. It took over the space formerly occupied by All Care dental which closed abruptly last year.

FLINT TWP. — Ten months ago, the dental office at 4307 Miller Rd. was causing frowns, instead of smiles.

It was among offices closed in early January when New-York-based Allcare Dental & Dentures abruptly went of business in an estimated 40 locations nationwide, including about six in Michigan, leaving hundreds of unhappy customers stranded in the middle of dental work.

The building on Miller Road sat empty until Sept. 21 when New You Dental Center moved in with a new game plan.

The address is the same but Donna Buscemi, New You’s office manager, stresses that it is not affiliated in any way with its predecessor.

New You is the very first dental office opened by Jane Paisopoulos, who has operated a dental lab in the Detroit area for many years.

Many of Allcare’s furnishings and equipment were left behind making it easier for New You to get up and running after a lot of needed clean-up work, Buscemi said.

Besides paperwork and x-rays strewn all over, the New You crew literally found filled coffee cups still sitting on tables, Buscemi said. It was as a UFO had swooped in and spirited everyone away so abrupt was Allcare’s departure.

But what’s past is past and New You is looking ahead to build its own reputation and forge new bonds with the community and future patients.

New You does not possess any of Allcare’s former patients’ records which were taken over by another dental business months ago. Buscemi said that some of those former patients are making appointments to give New You a try but it will be a new relationship.

They offer a full range of dental services including lab work.

“I have high hopes for this place, I think we will do well,’’ said Buscemi, who has worked in dental offices since age 16, beginning as a high school co-op student.

New You’s front window displays its motto: “Because you have a reason to smile.”

Paisopoulos is planning to open a second office in the next year or so in the Livonia area, Buscemi said.