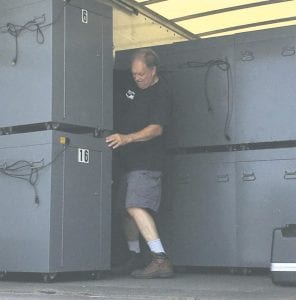 Old voting machines were loaded on a truck by Bob Heyl, a contract driver for Hart Intercivic, suppliers of the new equipment for Genesee County voting machines.

FLINT TWP. — Having no issues on the August 8 ballot makes this a good time to do some housekeeping at the township’s clerk’s office. As it happens, the township is getting new voting machines so the old gray washing-machine boxes were loaded on a truck and carted off last week.

The new machines are expected to arrive in September, said Clerk Kathy Funk.

On the financial side of things, Funk brought two voting-related questions to the township board last week. One sought approval of a Help America Vote Act (HAVA) Grant or voting machines and the second concerned buying additional voting equipment.

The board approved a HAVA agreement with the State of Michigan to provide $105,000 in grant funds for the following voting equipment:

15 Tabulators — one for each precinct

There are enough funds for the state to provide new machinery to all jurisdictions and also maintenance for five of a 10-year contract with Hart Intercivic, which is supplying the new equipment, Funk said. 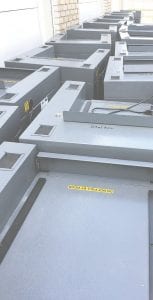 In addition to the grant-funded equipment, Funk asked the board for a budget amendment to cover the $11,100 cost of purchasing additional equipment as follows:

Two additional tabulators are needed for the Absentee Voter Counting Board and as a spare in case of failure of a machine on Election Day, Funk said.

The extra thumb drives are needed for the Absentee Counting Boards to run each precinct separately instead of having one drive for multiple precincts. If there is a balancing issue in one precinct, the Board of Canvassers requires that all ballots be re-tabulated – no matter what time of the night it is, she said. Having additional thumb drives means the difference between running, for example, 250 ballots as opposed to 2,000-plus ballots.

The Verity Keys are for each staff person, plus the Deputy Clerk, to activate the machines. The battery charger is self-explanatory.

The expenditures were unanimously approved and recommended by the Flint Township Election Commission and required a budget amendment by the township board. It was not known until June when the new equipment would arrive so it was not included in the original budget, Funk said.