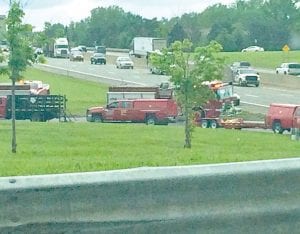 In this view from the Corunna Road bridge over I-75, emergency crews still were cleaning up several hours after a semi-truck rolled over on the southbound entry ramp to I-75, restricting traffic to one lane. Police also roped off the southbound entrance to the freeway during the clean-up.

FLINT TWP. — Memorial Day weekend travel hit a snag mid-morning on Friday for southbound travelers when a semi-truck overturned on the I-75 entry ramp off Corunna Road.

The driver of the semi was on the ramp from Corunna Road to southbound I-75 and was traveling too fast, according to a Flint Township police report. This caused his load to shift that tipped the truck and trailer over. It spilled about 40 yards of compost material onto the road, across two travel lanes on the freeway. No one was injured but police and emergency crews closed off the southbound ramp for several hours during the clean-up. Also, southbound traffic on I-75 was reduced to one lane, causing a back-up. — R.S. 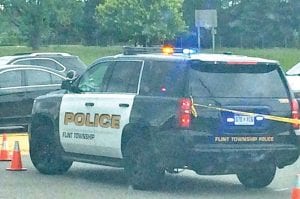