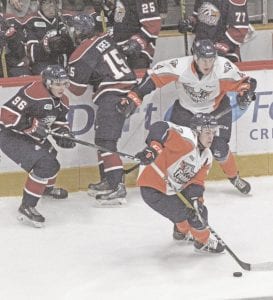 FLINT – The Flint Firebirds were riding a wave of success, winning four in a row and five of their last six until the Owen Sound Attack came to the Dort Federal Event Center on Friday. Flint tried to climb back but couldn’t seem to get any traction in a 5-2 loss.

In fact, Flint fell into a big hole in the first two periods. Owen Sound’s Jacob Friend scored just 3:52 into the game and Nick Suzuki added another later in the period. Making it a 3-0 advantage was Kevin Hancock, who recorded the only goal of the second period.

Nicholas Caamano finally helped the Firebirds get on the board early in the third frame. Owen Sound’s goaltender dove in an attempt to cover the puck at the top of the crease, but Caamano beat him to it and flung it into the back of the net.

That didn’t slow down Owen Sound one bit, though. Matt Schmalz buried one at the 13:10mark and Aidan Dudas rippled the mesh just 31 seconds later to push the Attack’s lead to 5-1 with less than seven minutes remaining.

Toward the end of the game, the Firebirds added one more. Cullen Mercer sent the puck to the front of the net and Everett Clark skated in and put it past the goaltender.

The Firebirds were on fire after clinching a surprisingly dominant win over the Sarnia Sting at the Dort Federal Event Center on Thursday, 3-1.

Flint tallied once in each period to eventually wear down the Sting, beginning with Jalen Smereck notching his second goal of the season, assisted by Mathieu Henderson and Ryan Moore. Smereck started a defenseman scoring spree, which was followed up by captain Alex Peters getting his first goal of the year with help from Hunter Holmes and Moore.

Fedor Gordeev was the third defenseman to score, burying his second of the year with an assist from Clark. Sarnia’s only goal came late in the game from Ryan McGregor, but it was too little, too late. Connor Hicks got the start in net for Flint and made 26 saves.

Flint now stands at 12-9-0-1 for fourth place in the West Division and seventh in the Western Conference. The Firebirds hosted the Saginaw Spirit yesterday, following VIEW deadlines, and travel to the Oshawa Generals on Friday and the Hamilton Bulldogs on Saturday.