Owner Experience Rates Them Top of Their Class

The 2016 Ford F-150 was recognized by customers in the Strategic Vision Total Quality Awards for delivering power and pick-up, safety and quality workmanship.

Ford F-150 – part of America’s best-selling lineup of F-Series trucks – won the full-size truck segment. The toughest, smartest, most capable F-150 ever was recognized by customers for delivering power and pick-up, safety and quality workmanship.

“We see time and again that for consumers, innovation does more to communicate quality than an absence of problems does,” says Christopher Chaney, senior vice president, Strategic Vision.

When Ford announced plans to put an aluminum body on their signature product, many in the industry were cautious or skeptical. Since then, F-150 buyers have largely put those concerns over the truck’s quality to rest. An abundance of data from the New Vehicle Experience Study (NVES) shows that the truck’s aluminum body does not detract from the driver’s impression of its durability. In fact, the sense of security that the vehicle provides actually increased when Ford made the switch to aluminum. The lighter frame also improves economic factors such as fuel economy and cost of ownership, while adding other important benefits over the competition such as increased acceleration. 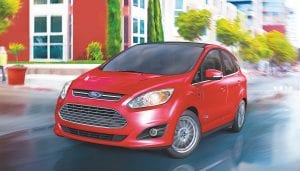 The 2016 Ford C-MAX Energi – a plug-in hybrid that can run in all-electric mode or on gas – received top honors in the small alternative powertrain car segment.

“Some auto manufacturers are hoping that attack ads on the Ford F-150 will convince shoppers of the lack of quality, hoping for similar success in election commercials,” says Strategic Vision President Alexander Edwards. “However, the Ford F-150 has provided a quality product combined with a strong positive emotional experience that makes it a leader. Ford buyers will continue to cast their vote with the F-150.”

Ford Mustang – which became the world’s best-selling sports coupe in its first year of global availability – won in the standard convertible segment based on high scores for image, interior design, and power and pick-up. 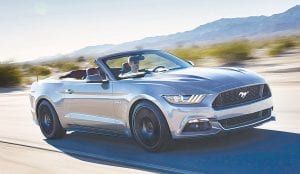 The 2016 Ford Mustang won in the standard convertible segment based on high scores for image, interior design, and power and pick-up.

Ford C-MAX Energi – a plug-in hybrid that can run in all-electric mode or on gas – received top honors in the small alternative powertrain car segment. C-MAX beat all other small hybrid and electrified vehicles in the survey by more than 150 points, including earning high marks for interior workmanship, comfort and thoughtful engineering.

Ford was also recognized in the corporation category of the Total Quality Impact awards.

The awards are based on survey responses from more than 39,000 owners of new 2016 model year vehicles after the first 90 days of ownership.