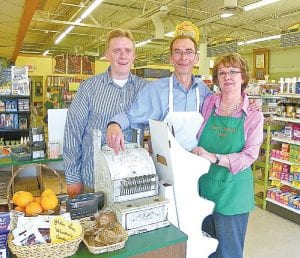 In a photo taken in February 2012, Don and Jean Wolfe and their son Drew stand behind a just-for-show antique cash register probably used by the first generation owners of Dale’s health food store.

According to an obituary from Swartz Funeral Home, Wolfe was born in Flint on July 12, 1951, the son of the late Dale and Jeanette (Macaulay) Wolfe. He married Jean Shaw on August 14, 1976.

His father Dale started the family-owned health food store in 1947 which operated at three downtown Flint locations — on Harrison, First and Saginaw streets — before moving to Flint Township about 25 years ago. At one time, Wolfe was partners with his brother, Doug.

In a View interview last winter, Don Wolfe recalled growing up in his dad’s business, standing on a chair to scrub carrots before he was tall enough to reach the counter and one of his first jobs selling popcorn to people who came downtown to go to the movie theaters.

Wolfe’s obituary described him as a wonderful family man who set an excellent example for his kids and many others.

Don and his wife Jean were an unstoppable team in family and business for 36 years. He was kind and fair. Don had a way of making everyone feel special. Many went to him for his sound advice.

Don was loved and respected by employees and customers alike. He was a natural born salesman with a strong desire to help people. He was an avid gardener and had a special love for his berry patches. Most recently he started a garden at the family cottage on Lake Bellaire. There was no place he liked better. He loved the lake, walks up the lane and pulling a hot loaf of bread from the masonry heater.

He loved to host a party and tell jokes. A consummate entertainer. Don had an infectious love for music and dancing. The Wolfe Family Reunion was one of the high- lights of every year.

As a young man Don traveled the world and continued to travel with his family. No one had more fun on a family vacation. Don loved escaping into a good book and found comfort in reading aloud to the family.

He was an active member of Court Street United Methodist Church., serving as a trustee and volunteering at Crossover Ministries.

The family asked that contributions in Wolfe’s memory be made to Crossover Downtown Ministries. — by Rhonda S. Sanders