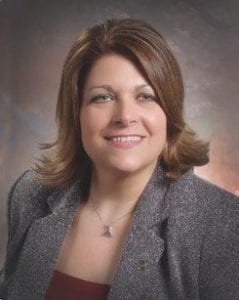 A 1993 graduate of Michigan Technological University, Panduren was hired by ROWE as an assistant project engineer in 1994 at the firm’s Flushing office. In 2000, she was promoted to project manager, named an associate (shareholder), and moved to the company’s Lapeer office. In 2006, she was named Civil Utilities Division manager, a role that oversees all municipal engineering and planning work for the company, and moved back to the corporate headquarters in Mundy Township. In 2010, Panduren was named a principal of the firm and became a member of the Board of Directors in 2012.

During her career at ROWE, Panduren has worked with various municipalities in Genesee, Saginaw, Tuscola, Oakland, Sanilac, and St. Clair counties on infrastructure projects. She has assisted many communities with obtaining and administering federal and state grant dollars to help complete a wide variety of projects, including treatment plants and utility system improvements, roads, bridges, and trailways.

Panduren has actively promoted excellence and education in the field of engineering for many years, currently serving as president of the National Society of Professional Engineers’ (NSPE) Educational Foundation. She is a past president of the Michigan Society of Professional Engineers’ (MSPE) and currently chairs their Legislative and Government Affairs Committee; MSPE is the state affiliate of NSPE.

Panduren is treasurer of the National Engineers Week Foundation, which is an organization dedicated to ensuring a diverse and well-educated future engineering workforce by increasing the understanding of and interest in engineering and technology careers. She is also a trustee on the National Institute for Certification of Engineering Technologists’ board of directors.

Panduren, a native of DeTour Village in the eastern Upper Peninsula, currently resides in Oregon Township in Lapeer County with her husband Randy and children Sydney and Logan. She is a strong supporter of her community, including serving as a member of the Thumbworks Workforce Investment Development Board and president of the Lapeer Family Literacy Center board of directors, and assisting with committee work for Resource Genesee.