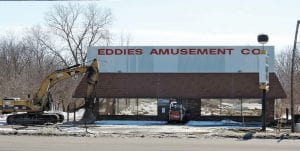 FLINT TWP. — By Thanksgiving, if all goes well, fans of Panera Bread won’t need to travel to Grand Blanc or Fenton to buy their favorite baked goods.

The township planning commission last week approved plans for the national bakery and restaurant chain to build a store at 4477-8 Miller Road, across from the Genesee Valley Center shopping mall.

It is the former site of Eddie’s Amusement which is being completely torn down, said Tracey Tucker, township economic enhancement director.

A 4,316 square-foot building is planned for the 1.45 acre redeveloped site which will have a drive-thru window, Tucker said.

The company is working towards opening by November, she said.

However, a list of requirements from the county Road Commission, threatening to derail the project, was discussed at the township board meeting Monday night.

Trustee George Menoutes, who serves on the Planning Commission, said he had been informed about stumbling blocks posed by the road commission.

The road commission’s list includes setbacks on three sides, paving a side street and installing a traffic light at the corner, Tucker said.

Tucker said that Panera developers have said they will pull out of the project rather than meet unreasonable demands. Tucker said she had also spoke to road commission official about the require- ments not usually asked for, though it is not clear at this point if they are suggestions or requirements.

“I flat out told him that you are going to kill this project,’ Tucker said of her conversation with the road official.

Menoutes asked that the board send a letter to road commission officials in support of Panera getting the go-ahead on this project.

Township Supervisor Karyn Miller said she would be attending a county roads and bridges meeting this week and would personally get some answers.

Tucker said as far as she knows the Drain Commission is ready to sign off on the project but will not do so until after the Road Commission signs off.

St.-Louis, Missouri-based Panera, as of Dec. 31, 2013, operated about 1,777 company stores or franchises in about 45 states, Washington D.C. and Ontario, Canada, according to its 12-31-13 annual report filed with the U.S. Securities and Exchange Commission It has about 70 locations in Michigan.

Serving about 7.5 million customers per week system-wide, Panera has about 40,100 total associates of whom 22,700 work, on average, at least 25 hours per week.