Parents having signs made to support graduating seniors 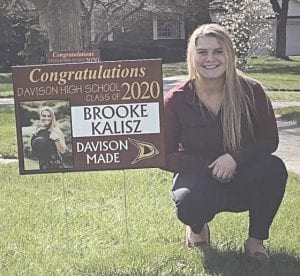 DAVISON — Having been denied the opportunity to graduate with a commencement ceremony, and the absence of a prom this year, as the community struggles with COVID-19, parents of the Davison High School Class of 2020 are doing something to recognize the hard work of their graduating seniors.

With the help of Debi Madore at Davison Sign & Business Supply, 229 N. State Rd., many of the parents are having signs made to recognize their seniors at this time when normally graduates would be attending commencement and taking part in other senior activities.

Madore said Stacey Manzardo, the mother of graduating DHS senior Brooke Kalisz, reached out to her several weeks ago and asked about making signs for seniors to give them recognition for their accomplishment.

It started out as approximately 30 signs, but Madore said it exploded into more than 180 signs in the first round. That led to the parents of seniors from other schools, and even college graduates, asking about signs for their yards.

Madore said she’s done signs for graduates from Central Michigan, U-M and MSU, as well as from nearby school districts such as Brandon, LakeVille, Lake Fenton, Marlette, Lapeer and Swartz Creek.

“Some people probably aren’t going to even be able to have graduation parties,” she said. “It makes me feel good to help them out a little. I enjoy watching them come to my house and pick them up from the front yard. One girl picked hers up and shook it in the air because she liked it so much.”

Manzardo said the signs came about after seeing discussion on a Facebook group page for 2020 seniors all over the United States. She said the local parents took the idea to Madore and in the beginning, they figured maybe 20-25 signs would be ordered.

Neither one expected that number to grow to about 180.

While the signs are mostly on display in the front yards of local families with graduates, Manzardo said parents are in talks to try and have their signs displayed in front of businesses up and down M-15 to give the Class of 2020 a proper send-off.

Madore said she had one parent who said they would even donate to help pay for a sign for anyone who couldn’t afford one.

Manzardo said all senior parents are trying to come up with different ways to honor the seniors without violating the ban on large groups gathering.

She said the whole stay-at-home order has been particularly hard for graduating seniors because they are missing the final days of their senior year.

“From my standpoint, and my daughter’s, it’s frustrating and heartbreaking, this was something she’s looked forward to her whole life,” said Manzardo. “These kids are going to graduate and move on to a university, or the military, and they’ve had their last few months (in high school) taken away from them. No one knew March 12 was going to be their last day of school.”

Manzardo and many other parents still hope their graduates will be able to take part in a commencement ceremony, honors night and prom.

Manzardo and the parent group is also doing an Adopt a Senior program, which can be found on Facebook as Davison Adopt a Senior 2020. The site invites those from the community to shower seniors with some extra love during this time. Those “adopting” seniors are encouraged to send a letter, a card, gift, gift card, Door Dash, snack or anything to let them know that they are loved and being thought of.

“So many had prom dresses purchased, they’re missing Spring athletics which would have been the last time some of them would take the field for soccer or lacrosse,” she said. “It’s hard for these kids.”