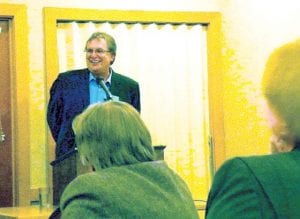 Jeff Parker, chairman of the Bay Mills Indian Community, talks to the West Flint Business Association about plans to build a casino here.

FLINT TWP. — Many questions were answered about a casino proposed to be built in the township, during a visit last week by the developer.

Jeff Parker, Executive Council President of the Bay Mills Indian Community, was the guest speaker at the monthly meeting of the West Flint Business Association (WFBA). Bay Mills proposes the casino development on 28 acres of land purchased last December at Lennon and Dutcher roads but first has to settle a legal challenge to its right to build one there.

It was Parker’s second appearance in the township this month. About three weeks ago, Parker and tribal attorneys spoke at the township Board of Trustees meeting about their stand on the legal challenge and plans for the property once it is resolved. They took questions from the board but not the public.

Parker’s appearance at the WFBA gave local citizens an opportunity to ask questions about the proposed casino. Many asked about the availability of jobs and business opportunities in conjunction with the casino.

Parker said satellite businesses would be encouraged and could include hotels, restaurants and retail stores.

He said the casino would generate about 700 jobs.

Although tribal-owned land is exempt from paying property taxes the township would receive about two percent of gross receipts from the casino which could amount to an estimated $2 -4 million a year, Parker said.

After the WFBA appearance, he planned to meet with township officials to begin making arrangements for police and fire collaborative services.

If the Bay Mills property is determined to be tribal land by the outcome of the pending litigation, it would operate its on sovereign government and be exempt from state and local laws. Arrangements for fire and police protection from the township would establish safeguards for the community at-large.

Parker spoke confidently about ultimately winning the lawsuit brought by the state of Michigan and another tribe which challenges the legality of a casino opened in Vanderbilt last year in a manner similar to the purchase of the Flint Township property. He said that motions to dismiss the lawsuit were in progress.

A federal judge ordered the Vanderbilt casino shut down in March but Bay Mills is appealing. Parker said he expected higher courts to rule in their favor.

He mentioned a timeline of about 18 months from next April, if permits are secured then, for the casino to open its doors. A 200,000 square-foot building is proposed.

Should Bay Mills casino plans for Flint Township fall through, Parker said the tribe has other interests it might pursue such as a charter school or manufacturing.

In an informal showing of hands, the majority of people attending the WFBA meeting expressed approval of the Bay Mills casino proposal.