Patriotic concert being planned in memory of Michigan’s fallen soldiers 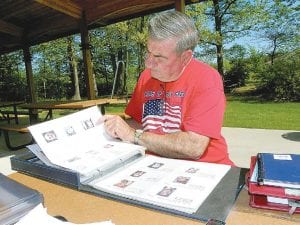 Donald McGowan of Clio looks through the scrapbook he has compiled of all fallen soliders from Michigan who will be recognized at a concert he is organizing next month.

The somber roll call of 230 soldiers from Michigan who have died in Iraq or Afghanistan is personal for Donald McGowan of Clio. In a tremendous gesture of patriotism, mostly at his own expense, McGowan has built a commemorative red, white and blue birdhouse for 228 of them.

Then he has personally delivered the birdhouses to the families left behind. He keeps a scrapbook filled with thank-you cards and other mementos from those families and his head is full of gratifying memories about each visit.

It is important to the families of these fallen soldiers to know that their loved one and the ultimate sacrifice they made for their country, is never forgotten, McGowan said.

“That will never happen as long as I am alive,’’ said McGowan. 71, who hasn’t let a heart condition stop him.

McGowan has also stenciled each soldier’s name on two memorial walls he built. One is permanently displayed at the Burton VFW Post 2777 and a portable one travels with McGowan all over the state when he participates in parades and other patriotic events.

Now McGowan, a General Motors retiree, is busy carving a gold star for each Michigan fallen soldier to be displayed at a free patriotic concert he is organizing in their honor from 7 – 9 p.m. June 13 at the Clio Amphitheater. Sponsored by the Gleaner Greater Flint Arbor, of which McGowan is a member, the Michigan Fallen Soldiers concert will feature music by Nashville recording artist Kelly Trudell who is well known for supporting the troops; upand coming singer Shelby Leonard, 16, of Montrose; noted country music singer/songwriter Lonny Ray and more.

McGowan’s memorial wall and the Montrose American Legion Freedom Bell will also be displayed. All branches of the military will be represented as well as area R.O.T.C. and Boy Scouts groups.

The event will conclude with the release of 230 yellow balloons while the crowd sings “Proud to be An American.’’

McGowan said he is expecting about 3,000 people to attend the concert highlighting a personal patriotic mission that began for him in 2005 with the death of his cousin’s son Master Sergeant Anthony Yost, 39, of Clio/Millington who died in Iraq. McGowan made the first birdhouse for them.

Since then he’s made more than 350 birdhouses – some duplicates requested by family members of the same soldier and others for families living out of state. McGowan has been showered with gratitude from the recipients.

One Michigan father told McGowan that he could only visit his son’s grave about once a year at Arlington National Cemetery in Virginia but with McGowan’s gift placed outside his window “I will see him every day.”

“That made me feel good,” said McGowan, who also made and donated the bluebird houses at the Flint Township Park on Norko Drive,

McGowan is accepting donations to help defray costs of the upcoming concert. Also donations of canned goods and nonperishable foods will be collected at the concert for the Food Bank of Eastern Michigan and a group called My Heart Supports the Troops will be on hand to accept donations for care packages they send to the troops.

For more details, contact McGowan by email at Donald-McGowan@comcast.net.