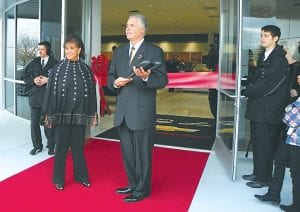 Patsy Lou Williamson, owner, and Larry White, general get ready to cut the ribbon for the reopening of the newly renovated Chevrolet dealership.

Work began in early June to convert the building to a uniform image design General Motors is requiring for all of its dealerships.

“This has been a long journey for us,’’ White said of the planning and redesign process that began last fall and involved GM officials, architects, builders, dealership staff and many others. 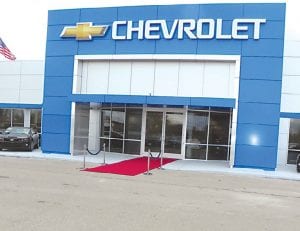 “We are very proud of our new dealership that Mrs. Williamson has invested in the community, “ White said.

Dubbing the vast car lot complex off Corunna and Linden roads “America’s corner,” White stressed Williamson’s commitment to American-made products and union labor. Williamson gave the green light for the renovation project with only two stipulations, White said. That was to use a local builder and union labor.

Siwek Construction Co., based in Flint Township was the builder for the renovation.

White said that commitment to American-made products carries over into other aspects of the dealership including the hard-to-find American flags flown across the 80-acre complex that also includes a Buick-GMC dealership and a used car showroom and lot. White noted that even the large gold ribbon bows displayed on showroom vehicles were Americanmade.

“So this is our heritage,’’ he said. “We’re the All-American car and tonight is a black-tie affair. The cars have put on their tuxedos for you.”

White also acknowledged GM officials in attendance at the event.

Williamson’s Buick-GMC dealership next door is next scheduled for a similar facility image redesign, also directed by GM.