Patsy Lou has a new development 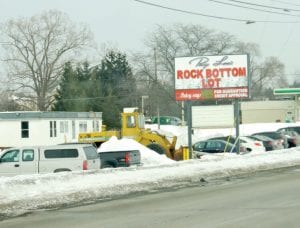 FLINT TWP. — Drivers on West Corunna Road may have noticed a new development on the north side of the street. A sign announcing the Patsy Lou Rock Bottom lot has been up for a while but now a trailer and vehicles apparently for sale have been parked on the lot.

Patsy Lou officials could not be reached for comment by press time on how the Rock Bottom lot is different from its Mega Lot of pre-owned vehicles on the dealership’s campus south of Corunna Road. Perhaps the name speaks for itself.

The Rock Bottom Lot is the second Corunna Road expansion for the dealership in the past six months. It is located next door to Patsy Lou’s Express Stop, a BP gas station and car wash that opened last summer.

The Rock Bottom lot is situated on a site formerly occupied for many years by Arrowhead Nursery. Bulldozers arrived in mid-December to raze the greenhouses and clear away all remains of the longtime nursery.