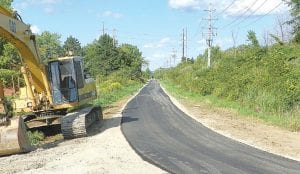 Work crews were out early Monday laying asphalt on part of the 2.69 mile trail. This section is looking northeast from Linden Road.

FLINT TWP. — A black ribbon of asphalt laid Monday by road construction crews brought the Genesee Valley Trail close to being finished after a year of stops and starts.

The 2.69-mile non-motorized biking and recreational trail won approval from the Board of Trustees at a special meeting on Aug. 31, 2010.

A legal challenge that cropped up a few weeks ago halted work on part of the trail but has been resolved. Muffler Man, 3455 Corunna Rd., threatened to sue to prevent removal of its customer parking lot where the trail borders it on the east side.

Muffler Man questioned ownership of the land which was part of the former Hoover Street vacated years ago by the Genesee County Road Commission with half going to Muffler Man and half retained as a public utility easement for the Michigan Department of Transportation.

Muffler Man received permission to build its parking lot on a portion of the MDOT right-of-way which borders the I-75 freeway.

“Muffler Man has acknowledged that it is MDOT’s property so the trail will be proceeding as planned,’’ said Linda Burchell, a MDOT spokesperson said on Monday.

“It is being done because we could do it,’’ she said. “We did not work out an agreement.”

MDOT owns the property but the project is being handled by the Genesee County Road Commission.

The trail is being paid for with a $950,000 Congestion Mitigation and Air Quality Improvement (CMAQ) federal grant.

When finished, the trail will start on Corunna Road near Ballenger Highway and end on Linden Road at Genesee Valley Center mall. Part of it follows an abandoned railroad track.

Fundraising to pay engineering fees was one of the biggest challenges slowing the trail’s development. Construction originally targeted to start in the spring got pushed back until late July.