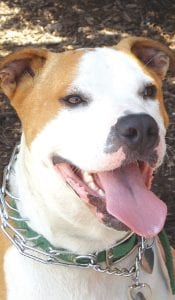 Just one of the many dogs available for adoption through PAWS of Swartz Creek. The organization is holding a fundraising campaign to build a larger facility.

SWARTZ CREEK — PAWS Animal Rescue in Swartz Creek kicked off its “Raise the Woof” campaign this month to raise money for the purchase of a larger facility.

“Our mission to care for unwanted pets is unchanged but our present facility is overburdened and people are surrendering animals in greater numbers, many of whom have medical problems,” said Glenda Beatty, the president of the PAWS Animal Rescue.

“That’s just a start. As we move along and how successful we are will define Phase 2,” Campbell said. “With the economy, we are needed more now than ever before.”

Campbell added that they have already looked at several sites in Clayton Townshiip and Genesee County and ultimately would like to stay in the area.

“We would like to stay in Genesee County,” Campbell said.

PAWS Animal Rescue is a rescue operation for dogs and cats and has been serving the Swartz Creek area for over 10 years.

In addition to individual donations, Campbell said the rescue operation is currently seeking sponsors and businesses to make pledges and donate money. She said donations could also be made in kind in the form of land, pet food or cages.

“We’re getting the word out and telling everybody,” Campbell said. “We want people to think about us.”

Richard Angelo, the attorney for PAWS Animal Rescue, said he is currently preparing the application for a special use permit that will be filed with Clayton Township in the near future. Angelo said the special use permit would allow the rescue operation to continue using the property in the manner they have been.

However, Angelo said whether the rescue operation can continue using the Seymour property on a temporary or permanent basis are questions that will be addressed by the Clayton Township Planning Commission after the special use permit application is filed.

“It’s really hard to tell what might happen,” Angelo said.

Angelo said he expects the planning commission to address the matter at its next meeting in November.

“We want to comply with their guidelines,” Campbell said. “In the meantime, how do we comply while we’re looking for a new place.”

For more information about the “Raise the Woof” campaign, please contact Campbell at 810-767-6366. Donations can be sent to the PAWS Aminal Rescue at PO Box 87, Swartz Creek, Michigan 48473.