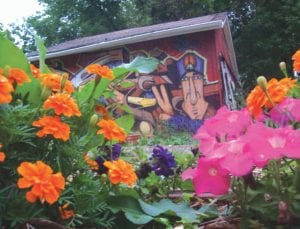 Peace Mob Gardens began a few years ago when Lead Planner Phillip Jacks sat with friends talking about how they could change the conditions of Flint’s Eastside. Since the group has made improvements to eight blocks of abandoned lots and homes. Pictured above is the garden where the vision began.

BURTON — Phillip Jacks would sit on a porch on Illinois Avenue on Flint’s Eastside a few years back with friends looking out to an abandoned lot talking about ideas on how the neighborhood could be recreated.

The group started by cleaning up that lot and building a garden and calling themselves the Peace Mob Gardens making Jacks the lead organizer.

The need to clean up that particular lot eventually led to decades worth of plans to improve and redevelop the mostly abandoned land and homes in that area.

While working on planting and growing the once useless land, Jacks said the amount of abandoned homes surrounding the area made for conditions where hundreds of stray animals were breeding and dying by starvation in the abandoned homes.

Jacks and a team of volunteer workers began collecting and disposing the carcasses, while dropping off individual complaint letters to the Building Inspection and Code Enforcement Office in Downtown Flint.

It took a few years but the unlivable houses were eventually torn down making Peace Mob Gardens even more successful.

Since the vision of transforming one lot, eight blocks of abandoned homes and lots are now being made useful once again.

The houses that are salvageable are being bought by Peace Mob Gardens are transformed into livable structures once again.

Jacks works without pay and said he has only taken a few days off in the past three months.

“Flint is worth saving, “ said Jacks.

As of now, the Peace Mob is banding together to take care of their “monetary needs.”

“We are done waiting for the government to come in and fix the problems,” he said.

One of Peace Mob Gardens main purposes is to encourage and inspire hope in its residents for the recreation of Flint.

Jacks said he is also interested in teaching people from other communites on how to recreate their own neighborhood.