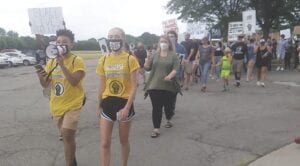 SWARTZ CREEK — Jodi Murphy drove nine hours to get back to her hometown of Swartz Creek, to participate in the Black Lives Matter march Friday, July 10.

“We can’t be quiet,” said Murphy, who now lives in Virginia. “The awareness is so important. For too many people, if it does affect them, they don’t care. I think more people should be upset.”

Greg Maul, a Vietnam veteran from Swartz Creek, has seen the evolution of racism through many decades.

“I see nothing has changed,” said Maul. “It’s time things changed. I’m so proud of these young people. It’s going to take them to change it.”

Natalie Groves, of Flint Township, grew up in diverse neighborhoods.

Murphy, Maul and Groves were among about 150 protesters who marched along the sidewalks from Swartz Creek Middle School to Mary Crapo. They carried placards and chanted along the route. At Mary Crapo, they paused for speeches. 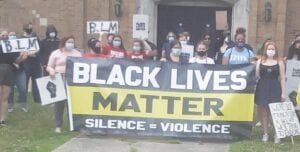 Several passersby beeped their car horns. Many people waved and held up their hands in a gesture of solidarity. One person, who passed the crowd a couple of times, shouted objections.

About five counter-protesters parked at the entrance to the middle school and recorded the marchers as they passed.

The march, however, remained peaceful.

Hall said the event was “amazing.”

“So many people came out to stand side-by-side and show how loving this community is,” she said. “We had a lot of really brave people who got up and shared their stories. It was so amazing to hear people talk about all of the different experiences they have had. It was a very exciting, emotional and, I think, beneficial day for our community. 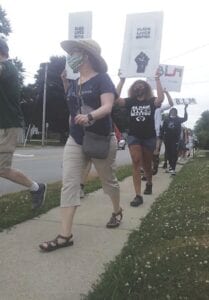 Protesters stayed on the sidewalks, carrying signs and chanting. Photos by Lania Rocha

“We had a few people who disagreed with our message, but the majority of people who attended were there to support us and our mission. It was overall a beautiful day full of so much love and compassion.”

The Metro Police Authority provided extensive police presence to ensure the safety of protesters and the community.

The march was separate from a second protest that took place Saturday afternoon in downtown Swartz Creek. City officials said the organization that conducted the Saturday demonstration had said they would stay on the sidewalks and remain in the area of the Civic Drive campus, but they quickly took to the streets, blocking traffic on Miller and Morrish roads.