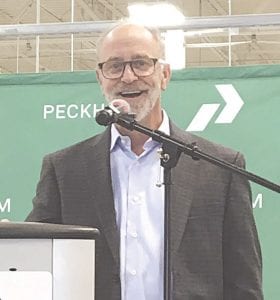 Peckham Inc. President and CEO Mitch Tomlinson welcomes about 100 visitors to an open house Sept. 5 for Peckham’s new manufacturing facility in Flint Township. The plant eventually will employ up to 200 workers with disabilities. Photos by Jalene Jameson

Peckham Inc. held an open house Sept. 5 at its Flint Township location at 3080 S. Linden Road. The renovated facility was a former furniture store and now has more than 33,000 square feet of manufacturing space. It also includes more than 8,000 square feet of flexible office and classroom space, an internet café and training rooms.

The facility will provide up to 200 sewing machine operator jobs over the next 12 to 18 months for people with a wide range of disabilities. Jobs are full time, starting at $10 an hour with health benefits and the opportunity for upward mobility as workers’ skills increase. Additional job opportunities are also available for people without disabilities.

Peckham President and CEO Mitch Tomlinson said Flint Township has been warm and welcoming in helping bring Peckham and its jobs to the area. 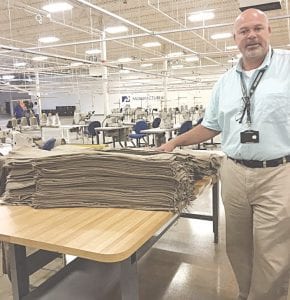 “I just can’t say enough about how open and welcoming and warm Flint has been to bring our company here,” Tomlinson said. “The refreshing thing about Flint is the strength of common purpose, and we’re so much stronger working together in creating opportunities for people with disabilities.”

Headquartered in Lansing, Peckham is a nonprofit vocational rehabilitation organization that provides opportunities for people with disabilities and other barriers to employment. For more than 42 years, Peckham has provided training and jobs to thousands of people with barriers through five business lines throughout Michigan.

During a tour of the facility, Larry Stevens, manager of the new Flint Township plant, said the plant currently employs 60 workers and will grow as the company gains more production contracts. At this time, workers are completing military contracts sewing winter undergarments of pants and shirts, then packaging and shipping the finished product.

“Our employees come in and receive two weeks of individualized training,” Stevens said. “If they don’t quite have it down in two weeks, we give them a third week of training. Everyone is also cross-trained to be able to do other jobs if someone isn’t able to make it in. And they have the chance to move up from sewers to Level 1, Level 2 and on to supervisor. But not everyone wants to be a leader, so they can become a master craftsman. We have plenty of opportunities to help our workers be successful.”

Stevens came from the automotive industry and has been with Peckham for 12 years. He said his laid-back personality is a good fit for working with people with disabilities.

“It’s an easy-going place,” he said. “There’s no yelling. We have a lot of training in soft skills, learning how to make training and work positive and supportive.”

Stevens is so determined to see his workers succeed that he spent a couple of early mornings driving to Flint Township to ride the bus to Lansing and back to help workers learn their bus schedule and how to get back and forth from work every day.

Tomlinson said his team has worked extensively with Luke Zelley, chief amazement officer of The Disability Network, which provides services for youth and adults with disabilities.

“Right now there are 20,000 people with disabilities in Flint and Genesee County who are on disability and not working, and these are people who want to work,” Zelley said. “They just haven’t been asked or don’t see the potential or opportunity. Peckham has a staff that knows how to provide accommodations and create a culture of inclusion. They really want to share their model on how to create an inclusive workplace. They ask, ‘How do you support every employee to reach their full potential,’ and that’s not just employees with disabilities, but every single employee.”

Justin Joliboix a quality inspector, is one of the employees who has been able to reach his potential at Peckham. Joliboix was an electrician for about 20 years before he had an accident that left him in a wheelchair. He wanted to go back to work and saw an article that mentioned Peckham would be at a job fair and decided to check it out.

“Larry told me what Peckham does and how they’re accepting and like to include everybody,” Joliboix said. “I saw the opportunity and gave it a chance. When I went to Lansing, I’ve never seen a building like this before. Manufacturing was new to me, so I didn’t know what to expect. When you’re in a wheelchair, you look for border-free environments, and that building in Lansing is border free. They offer schooling if you want to learn a language or anything you want to do. I’ve watched blind people work fulltime jobs, and I’ve never seen that before. I was amazed by that, and I’m so glad to be part of it.”

Peckham Inc. is a national award-winning organization that has been recognized for its achievement in providing vocational rehabilitation, creating inclusive cultures and building a quality workplace for its employees. It also has operations in Phoenix, Ariz., and London, Ky.

Tomlinson said the Flint Township facility will work with other commercial vendors, as well as the military, including doing work for Patagonia, a designer of outdoor clothing and gear. As more contracts are obtained from vendors, more workers will be hired.